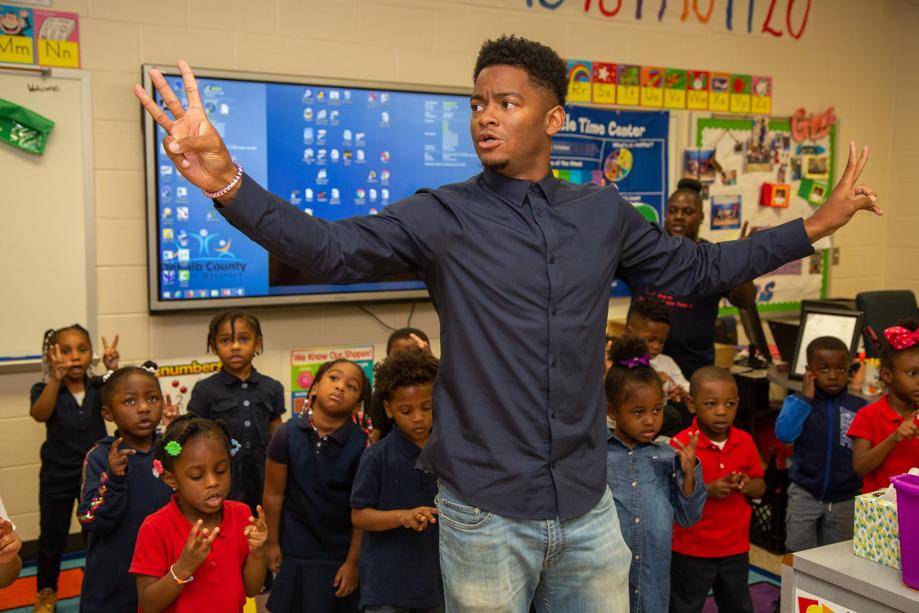 Georgia Pre-K Teacher of the Year, Johnathon Hines , works with his students at Barack H. Obama Elementary Magnet School of Technology in Atlanta on Tuesday, Oct. 15, 2019. His Teacher of the Year honor showed his pivot from a lifelong dream of playing professional basketball to a goal of showing little black boys and girls that black people can be successful outside of sports and entertainment. He’s also the first black man in the state to receive the honor. PHOTO BY PHIL SKINNER

The DeKalb County School District’s communications department was honored for its original programming, including a piece the department produced on Georgia Pre-K Teacher of the Year Johnathon Hines, a DeKalb teacher.

The Telly Awards recognize local, regional and cable television content and commercials annually, and continue to expand its reach as digital and broadcast media continue to evolve. They are given in dozens of categories, with winners receiving either gold, silver or bronze awards for their work.

“Our production team and students have worked incredibly hard to create programming that empowers, entertains and educates the DeKalb community,” said Portia Kirkland, the district’s interim director of communication and a producer for DeKalb Schools TV.

Fourth of July fireworks around metro Atlanta changed, canceled for 2020