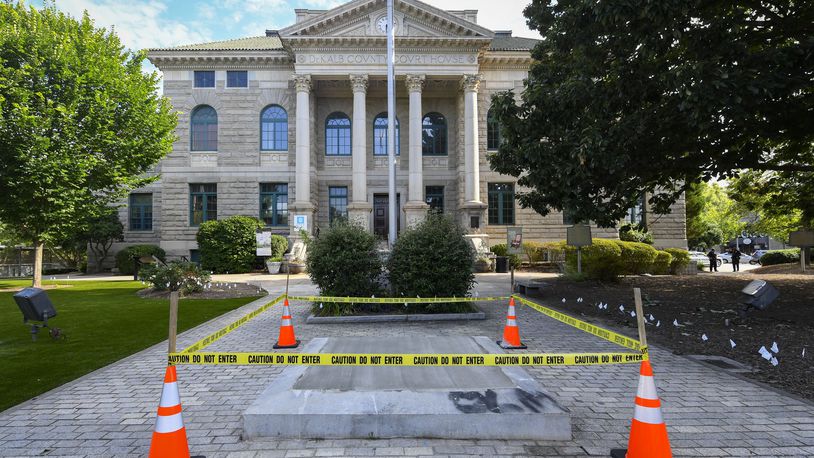 The spot where an obelisk confederate monument once stood on the courthouse grounds, is shown before a press conference occurs in reference to it in Decatur. DeKalb Superior Court Judge Clarence Seeliger declared the monument that was erected in 1908 by the United Daughters of the Confederacy, to be a public nuisance that should be removed. JOHN AMIS FOR THE ATLANTA JOURNAL-CONSTITUTION AJC FILE PHOTO

DeKalb County has filed a motion to dismiss a lawsuit over its removal of a Confederate monument last summer, calling the attempt to resurrect the Lost Cause tribute “a wish without a supporting legal theory.”

DeKalb plucked the 30-foot obelisk from its century-old perch on the Decatur Square last June, about a week after Superior Court Judge Clarence Seeliger deemed it to be a public nuisance and ordered its removal. Seeliger, who has since retired following a illustrious career, later filed an order prohibiting the monument from ever being restored.

The Georgia division of the Sons of Confederate Veterans filed a lawsuit last month challenging the removal and calling for the obelisk to be returned to its “former place of honor.”

The group argued that DeKalb and the city of Decatur — which filed the original petition asking Seeliger to order the monument be taken down — had taken “collusive action” to circumvent state law protecting Confederate tributes.

On Thursday, attorneys for the county filed not only a response to the lawsuit but a separate motion to have it dismissed.

Among many other arguments, deputy county attorney Laura K. Johnson wrote that Seeliger’s original order could only be declared void if he lacked “either personal or subject matter jurisdiction,” which wasn’t the case.

Johnson also wrote that the Confederate group lacked standing because it did not intervene in the case or challenge the removal before Seeliger’s final order was entered last September.

“The fact that Plaintiffs disagree with a court order does not make it void,” Johnson wrote.