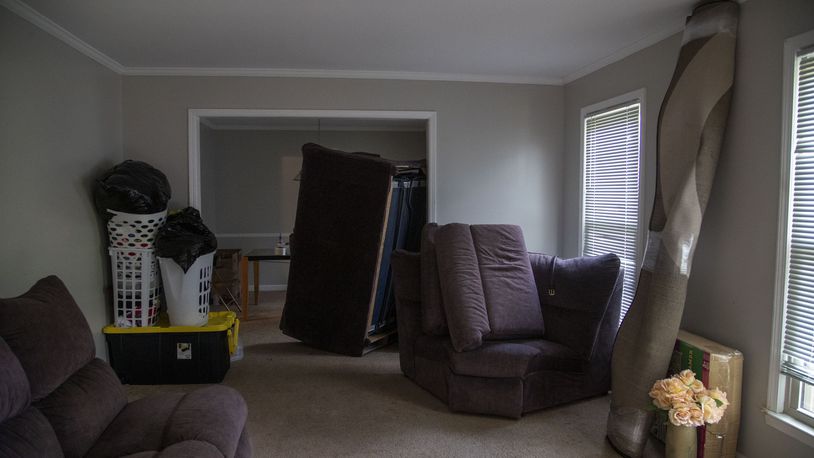 07/28/2021 — Decatur, Georgia — Packed belongings wait to be loaded into a truck in the living room of Joshua Elam’s residence in Decatur, Wednesday, July 28, 2021. Elam and his family have been renting this house for 2 years. (Alyssa Pointer/Atlanta Journal Constitution)

DeKalb County has now distributed about $7.9 million through its COVID-related rental assistance program.

That number is still a fraction of the $21 million in federal relief funds that the county originally allocated for the Tenant-Landlord Assistance Coalition — but also suggests that the pace of distribution has continued to accelerate in recent weeks.

“We are now operating at a pace where over $200,000 a day of assistance is being administered through the program,” county COO Zach Williams said during a Tuesday board of commissioners meeting.

Williams said 1,382 families have now been assisted through the TLAC program, which is intended to help prevent evictions by providing landlords with money to cover tenants’ past due rent and utility bills. Applicants are eligible to have 100% of their back due rent covered, up to 12 months. Three months of future rent is also available.

DeKalb’s program started slowly, thanks in part to a international cyberattack that wiped out many emails and applications on a county server. By June, nearly four months into the program, only about $700,000 had been distributed.

And while getting money out quickly was always important, it’s now even more so for DeKalb.

Chief Superior Court Judge Asha Jackson put a countywide eviction moratorium in place in August, making DeKalb the only local government in Georgia to have such a policy in place.

Jackson’s order protected DeKalb renters when the U.S. Supreme Court struck down the Centers for Disease Control and Prevention’s nationwide ban on evictions in late August, but the county moratorium is currently set to expire at the end of September.

At the county’s current pace, it will have distributed somewhere around $10 million — or less than half of the money allocated to the TLAC program — by that date.

DeKalb Commissioner Mereda Davis Johnson is hosting a virtual town hall meeting about the county’s rental assistance program at 6:30 p.m. Thursday. Tenants and landlords are invited to attend to learn more about what’s being offered.

Visit commissionermerdajohnson.com for more information or to register.

“We know that the eviction moratorium is coming to an end in DeKalb County and we want to do our part to keep residents in their homes,” Davis Johnson said in a news release. “I am personally inviting all District 5 tenants and landlords who are interested to join us at this important meeting.”

Tucker to use $1.2M in pandemic relief funds for rent, utility assistance