DeKalb elections board agrees to cooperate with long-sought review 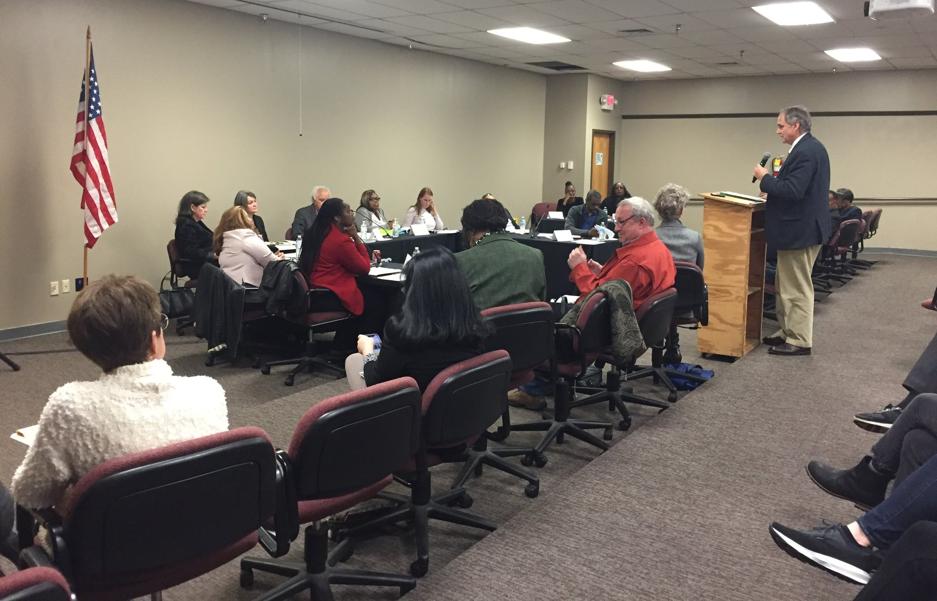 DeKalb County Commissioner Jeff Rader (right) speaks to the county Board of Registration and Elections on Thursday. (Photo by J.D. Capelouto)

By J.D. Capelouto and Tyler Estep
With longstanding questions still lingering about DeKalb’s 2018 elections and a busy new voting cycle revving up, experts have been cleared to conduct an in-depth inspection of how the county’s elections department operates.

But it remains unclear when the long-sought review might happen, as election officials and county leaders continue to negotiate the timing of the assessment.

The county elections board voted Thursday to cooperate with a five-day probe by consultants and former elections officials, a process that county commissioners have been pushing for since the 2018 elections. During that cycle, DeKalb residents reported voting irregularities and issues with the absentee voting process.

The county commissioners, who operate separately from the elections board, voted in March to conduct an audit of the elections department. But the county’s independent auditor determined he could not perform a proper audit due to the lack of available records and data on past elections, so the county chose to hire outside consultants to conduct a review instead, DeKalb Commissioner Jeff Rader said.

(left to right) Chairman of the Elections Board Samuel Tillman, Director of Voter Registration and Elections Erica Hamilton and Secretary of State Brad Raffensperger talks as Kentavious Ford unloads a pallet from a shipment of Georgia’s new secure paper-ballot voting machines at the Dekalb County Voter Registration and Elections offices in Avondale Estates on Monday December 30, 2019. (Photo by Phil Skinner, The Atlanta Journal-Constitution).

Elections board chairman Samuel Tillman, who has denied any county culpability for the missing ballot applications, said Thursday he was “more than happy” to work with the commissioners and consultants.

But he pushed back on the proposed timeline, which called for the review to be conducted next week and for consultants to provide a final report by the end of February.

“I certainly would like to know who they are, what they’re going to do, and have some conversation with them before they show up,” Tillman said. He said he would get back to Rader with a suggested time for the experts to visit the office.

During a Jan. 3 meeting, members of a new ad hoc elections committee — which includes three commissioners and members of the elections board — expressed concern about a lack of cooperation by elections leadership. Commissioners said the department had pushed back on the review, saying they would be too busy preparing for March’s election and getting acquainted with the new voting machines being rolled out across the state.

During the committee meeting, Rader told the consultant team to plan on visiting the elections offices next week but quipped that they should “get a refundable ticket in case something blows up.”

Rader attended Thursday night’s elections board meeting to stress the importance of the review, saying voter complaints reached a “critical mass” over the course of last year.

He asked for, and received, the board’s formal vow to cooperate.

“I am optimistic that the Board of Registration and Elections is supportive of what we’re trying to accomplish. They see some value in the results that will come from it,” Rader said after the meeting. The county Democrat and Republican parties each nominate two members to the elections board, and the fifth member is appointed by the county’s chief Superior Court judge.

November 5, 2019 DeKalb County: Sarah Jones votes with her children, Left to Right – Noah-9,Elise-6 and Anna-6 at The Gathering at the Church at Decatur Heights polling place at 735 Sycamore Drive in Decatur on Tuesday, Nov. 5, 2019. The county of DeKalb voted on a referendum that would restructure the county’s ethics board after the Georgia Supreme Court ruled that the way its members are currently appointed is unconstitutional. Critics of the proposal say the restructuring would weaken the ethics board and reduce some of its powers. Every city in DeKalb also had municipal elections for mayor or city council this fall with several incumbent mayors are facing challengers. There were scores of mayoral and city council seats up for grab. Photo: JOHN SPINK/JSPINK@AJC.COM

The consultants will assess the procedures for processing registrations and vote-by-mail applications, according to documents outlining their plans. They will also look into the implementation of the new voting system, which involves replacing Georgia’s 18-year-old electronic machines with a combination of touchscreens, printed ballots and scanners.

One of the consultants, Amber McReynolds, told commissioners on Jan. 3 that she “would want them to treat me as if I’m a voter” and go through the entire process from start to finish.

“If I can reduce the voter’s time … we can ultimately then process more people more quickly, more efficiently, and then we can do the same thing on the back end,” said McReynolds, who heads the elections consulting firm Strategy Rose LLC.

The missing ballot applications that helped trigger the push for the probe were first reported by the Georgia Democratic Party and candidate Stacey Abrams a few weeks before 2018’s highly contentious governor’s race was decided. The party claimed it had tracked around 13,000 mailed absentee ballot requests in DeKalb and that only about 8,300 ballots were later sent to voters.

Tillman, the elections board chair, has said the county never received the applications and pointed to the out-of-state vendor handling the process for the Democrats as the likely culprit.

Secretary of state Brad Raffensperger said at the time his office was launching an investigation, the current status of which is unclear.

Trump vs. Iran: It’s not over