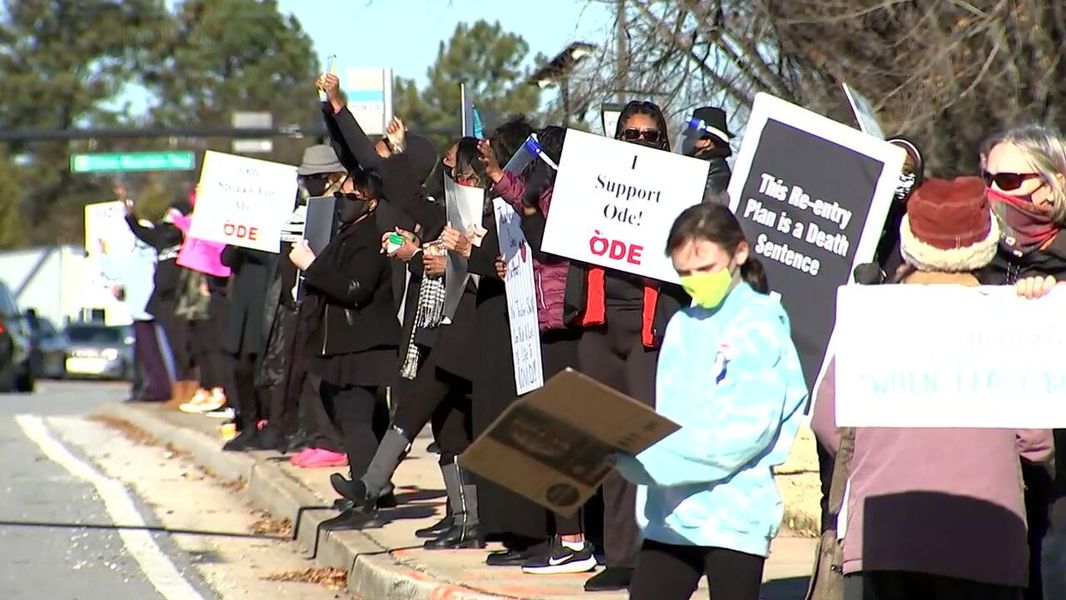 Some DeKalb residents, including those pictured at this protest in December, may be relieved to know that the school reopening will be delayed.

Superintendent Cheryl Watson-Harris announced during Monday’s school board meeting that the district will push back in-person learning by a month, to mid-February. A majority of staff will begin retuning Feb. 3 — but only if the county-wide positivity rate is no higher than 10%, she said.

Classrooms were set to reopen on Jan. 19 for students in five grade levels — despite DeKalb’s positivity rate being above the 10% threshold.

Watson-Harris made the announcement after the board held a closed-door executive session for nearly two hours. It is unclear what was discussed in the closed session, which in Georgia is permitted only for personnel issues, potential litigation and real estate transactions.

Any executive session policy discussion, such as when to reopen classrooms, could be a violation of the state’s Open Meetings law.

“Our goal remains getting our staff and our students back into our buildings as soon as that is safe to do so, Watson-Harris said after announcing the new policy. “Our response to this pandemic has to be dynamic and we have to be flexible based on the information available to us.”

Watson-Harris said last month that 40% of families indicated in a survey that they want face-to-face learning. But there were also two protests outside of district offices over the holiday break by parents and staff members who contend that classrooms can not be reopened safely.

The Georgia Department of Health reported on Monday that DeKalb has had 710 cases per 100,000 people and a 14.7% positivity rate over the last two weeks.

DeKalb schools closed last March and remained virtual for the entire semester because the community spread was never reduced to 100 cases per 100,000 residents for 14 days, which was the district’s initial reopening metric.

The all-virtual school year spurred protests by parents demanding the option of sending their children to classrooms.

DeKalb board member Joyce Morley, who opposes reopening at the height of the pandemic, said DeKalb cannot put people “on these emotional rollercoaster rides.” Morley told Watson-Harris that the superintendent knew weeks ago that “these schools should have never been reopened.”

“This is not a tryout,” Morley said. “It’s been a gross level of disregard.”

Fighting back tears, board member Diijon DaCosta said the county needs to make decisions to protect the wellbeing of its people. DeKalb was one of just a few districts in metro Atlanta that did not reopen buildings during the first half of the school year.

“We have to continue to lead by example,” he said. “We have to make the right decision for our teachers, our staff and most importantly our scholars.”

Parents called into Monday’s board meeting to share mixed responses to the district’s reopening plans. Lisa Martin, of Dunwoody, said virtual learning is not working in the special education community. Jennifer Morris said her daughter’s learning has declined because it has been 10 months since she was last in a physical classroom.

But other parents said the district should wait for vaccinations to become widely available before reopening. Trina Intra, the parent of a 3rd grader and a 6th grader in the district, pointed out that educators in Cobb County and Henry County have died from COVID-19 complications.

“Wiping surfaces is not going to keep everybody alive,” parent Wendy Hamilton said.

DeKalb chief operations officer Benjamin Estill II told the board that school buildings have a 82% “preparedness rate” as of Monday evening. Watson-Harris said district officials have identified “gaps” in the preparedness of the buildings for face-to-face learning, so they will be readying the buildings for February and giving teachers an opportunity to see that progress.

The district reopening plan requires mitigation strategies, such as mandatory mask wearing and a limited number of students in classrooms whenever possible.

The neighboring Fulton County Schools is holding online classes this week due to a “post-holiday surge” of cases. The Cherokee County School District also canceled in-person learning this week. The districts plan to reopen Jan. 19.

DeKalb to Celebrate MLK Holiday with Tribute and Food Distribution