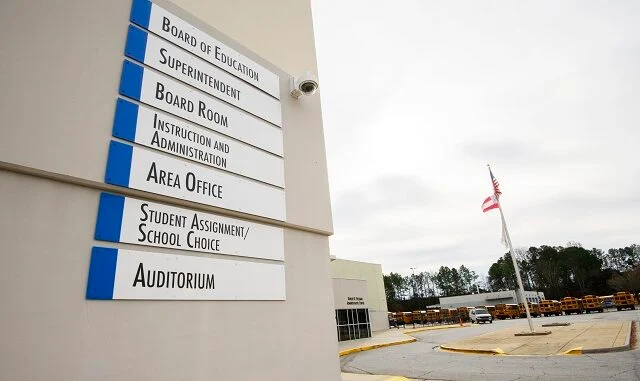 At the DeKalb County Board of Education meeting on January 10, Planning/GIS Analyst Hans Williams presented recommendations from the district’s Comprehensive Master Plan. The recommendations are mostly unchanged from those presented at public Q&A meetings and to Parental Advisory Committees.

There is public opposition to some proposals, including consolidation of Howell Mill and Hawthorne Elementaries and moving some students from the Dunwoody to the Chamblee cluster, voiced at board meetings in December and January. Williams pointed out that the specific actions recommended in the plan will be carried out individually and will require discussion and board approval.

Williams stated that no redistricting is recommended for Fall 2022, and district staff are still considering the implications of conversion to K-8 schools. Public engagement on redistricting and K-8 conversions will begin Fall 2022 to be implemented Fall 2023.

“There is a conversation about K-8 schools that the district needs to have,” added Williams.

To fund the projects, the CMP recommends adjusting eSPLOST V and drawing on the recently passed eSPLOST VI. Some projects will be closed out, some expanded, and some new projects will be added. Stoneview and Dresden Elementaries will be rebuilt rather than renovated, while Cary Reynolds will be combined with Dresden. Reserves and allocations previously set aside will be folded back into available funds. In total $48 million will be drawn from adjustments to eSPLOST V.

In addition, a combination of increased tax revenue, closing out projects from previous eSPLOST programs, and reimbursement from the state will make another $150 million available.

$15 million will be set aside for schools including Livsey, Hawthorne, Hightower, and Dunaire Elementaries among others, where future plans to replace or consolidate the schools are projected but immediate repairs are needed.

Board member Alyson Gevertz praised the responsiveness of many aspects of the plan, but stated that she did not believe that the amount set aside for repairs would be sufficient. Gevertz emphasized that the schools must be functional for the students who will be attending them in the next few years before projected replacements and renovations will occur.

Board member Anna Hill stated that the same language describing needed repairs at Hightower Elementary has persisted through SPLOST IV, V, and VI, and was repeated on last month’s status report. “This is unacceptable,” she added.

Williams acknowledged that work on Hawthorne had been delayed and stated that it was the last project left from SPLOST IV. He said that work had begun on Hawthorne. Superintendent Cheryl Watson-Harris stated that the district is creating a dashboard so that stakeholders can check on the progress of various projects.

Board member Marshall Orson suggested that the board consider taking on debt in order to complete projects more quickly.

“We’re a big district, we have great cash flow, and it’s possible that it may cost less in the long run to get the work done sooner because of inflationary pressures,” said Orson.

– Superintendent Watson-Harris and Chief Financial Officer Charles Burbridge gave a mid-year budget report. Revenues have increased over projections while spending has remained flat. As a result, current projections are that instead of spending $17.1 million out of the reserve fund balance, the district will be able to add $63.9 million.

– The monthly human resources report, presented by Interim Human Resources Director Dr. Michelle Jones, revealed that only 47% of substitute requests are being filled. Board member Dr. Joyce Morley asked who is being put in classrooms when substitutes are not available, saying that she was receiving reports that paraprofessionals were being put in charge of classes but were not being paid at the higher rate that a substitute or teacher would receive. In addition, Board member Anna Hill asked about the lack of bus drivers and what the district is doing to address the problem in the midst of a national shortage of school bus drivers. The board accepted the report with a vote, five for and two against.

“I’ve been talking about this report for months. Accuracy builds confidence and this is not accurate,” said Board member Hill.

– The Board approved the contract renewal for Naviance Inc. by PowerSchool, for an additional year in the amount not to exceed $365,000. Naviance provides a comprehensive college and career platform for the district.

– The Board approved an amended extension to CenturyLink Communications LLC (Lumen) for the purchase of disaster recovery as a service for the district, in an amount not to exceed $700,000.00.

– The Board approved a contract extension for cabinet sign replacement services to Metro LED, LLC for an additional year in the amount not to exceed $300,000. This contract is for the digital marquis signs placed in front of schools.

– The Board authorized the district to purchase natural gas from SCANA Energy Marketing, Inc. in accordance with a statewide contract, in an amount not-to-exceed $2,500,000, through Dec. 31, 2022.

– The Board accepted a donation of laptop computers to support the Girls Who Game program from Microsoft & Dell, valued at $25,116.00.

– In addition, the Board approved the award of a contract for audit services for enterprise risk assessment to Plante Moran for an amount not to exceed $75,000.

The policy change will be voted on at the February Board of Education meeting.