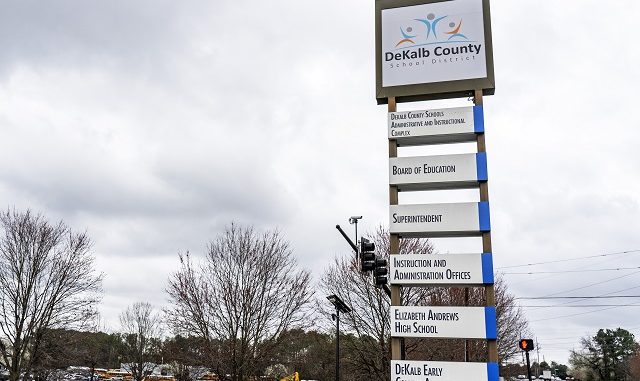 During public comment at the DeKalb Board of Education meeting on Oct. 18, several parents expressed concern about the school system’s dress code and its effect on students. Their criticisms were in line with recent national conversations on the topic, including an ongoing protest by students in nearby Cobb County.

Parent Beth Heffron stated that dress codes are legal as long as they are not discriminatory, but that the current code focuses on clothing items specific to girls and students of color. Heffron suggested a review board for the dress code that would include students and parents.

Janie Mardis, another parent, said that the dress code is irregularly applied, and asked the Board to track which students are being dress coded by race, gender, and disability status.
HLC – 880×109

Parent Amy Bryant said that the code was detrimental to students and staff.

“Staff are being asked to scrutinize children’s bodies in a way that is predatory, which makes both students and staff uncomfortable,” said Bryant.

In other DeKalb County School Board news:

– District finances continue to be a primary topic of conversation at Board meetings.

While Chief Financial Officer Charles Burbridge has been able to deliver good news about monthly accounting and the timeliness of the yearly audit for the district, how much money the district is spending and how decisions are being made remains a matter of concern for both board members and the public.

“Our budget has been pushed up to almost $2 billion, which is a significant increase, and there is a lot of concern throughout this community, across the district, about our spending authority,” said Board Chair Vickie Turner.

The Board approved changes to policies governing contracts and purchases which reduce the amount of money that can be spent at the Superintendent’s discretion without board approval. Previous policy required amounts over $100,000 to be approved by the board; the new policy requires approval for amounts over $50,000.

In addition, new hires for director level and above must also be approved by the board. Previously, approval was only required for executive level hires.

Board member Marshall Orson proposed tabling the motion until the next board meeting in order to allow for public comment, and to substitute the word “consultant” for “independent contractor” in order to be more in line with other districts’ policies. Both motions failed.

“We have something that other districts don’t. That is a material weakness in internal control. And when we have that, we need to develop compensatory controls,” said Board member Anna Hill.

Hill on Oct. 19 followed up with Tucker Observer to provide some additional context about her comments.

“In our meeting last night, I reminded my colleagues on the Board/the Superintendent/the public that DCSD has had audit findings of ‘material weakness in internal control and significant deficiencies in internal control’ for many years,” Hill said. “These are technical terms for audit findings (terms of art used by CPAs/accountants/auditors) and stated in the audits issued by [the Georgia Department of Audits and Accounts].”

Both Orson and Board member Allyson Gevertz said that they did not feel this policy change would do much to address internal control problems. Gevertz said that she would like to see more from the Audit Committee.

The board is scrutinizing hiring practices in the district, especially the practice of hiring temporary staff.

– Two items that were tabled at September’s regular board meeting, one to extend a contract with ARK Temporary Staffing for school nutrition, custodial and clerical staff, and another to extend the contract with SSC Services for security staff, were rejected at a special called meeting on September 27.

– At the meeting on October 18, the board approved a request to staff the finance department on an as-needed basis through a number of services, including Abacus Corporation, Corporate Temps, 22nd Century Technologies, Cogent Infotech Corporation, Robert Half, Howroyd-Wright Employment, Tryfacta, Inc. and US Tech Solutions, Inc.

– The board approved a request to amend a contract with Automatic Data Processing, Inc. which would raise the annual estimated cost of post-payroll processing from $98,000 to $230,000.

– SPLOST spending came under some scrutiny during the meeting as well. During public comment, parent Kirk Lunde urged voters not to vote for the upcoming SPLOST VI, because of concerns with how money from previous SPLOSTs has been spent.

“We don’t know how money has been spent in the past, and we don’t know what will happen in the future to change what is happening,” said Lunde.

– The board approved a request to close out projects at Stoneview Elementary, Austin Elementary, and Cedar Grove Elementary which were funded by e-SPLOST IV, in order to receive a capital outlay reimbursement in the amount of $862,472.50 from the Department of Education. In addition, the board approved an application for site approval from the Department of Education for a culinary classroom addition at Towers High School, a project also funded by E-SPLOST IV.

In addition, the board approved an application for approval of improvement projects at Druid Hills High School, the International Student Center at Druid Hills, and Midvale Elementary, totaling $2,039,031, to be funded by E-SPLOST V.

Board members Dr. Joyce Morley and Anna Hill both questioned why some projects have been delayed as long as they have, including the culinary arts classroom which had originally been part of an earlier project.

Superintendent Cheryl Watson-Harris said that the district contracted with a CPA/CFA who did an analysis of all the district’s spending on E-SPLOST projects. Those findings will be presented at a meeting, the date of which will be announced on the district’s website.

“Our commitment is to transparency. We recognize that will be a very deep conversation,” said Watson-Harris.

– The board approved a request to extend a contract with Tyler Technologies for Enterprise Resource Planning for another year. Tyler Technologies has provided the system which allows the district to track supply chains, finances, and other aspects of operation for the last five years. The estimated cost for calendar year 2022 is not to exceed $781,000

– The board approved awarding a contract to DTSpade for real estate advisory services, not to exceed $100,000.

– The board approved renewal of Swift Currie as legal counsel for worker’s compensation and general liability.

– The board approved a request to award a contract for network security software and infrastructure to Dell EMC, Layer3, and Integrated Communications Network in an amount not to exceed $2,200,000.00.

– The board approved requests to purchase new school buses, tires, and fuel for the 2022 Fiscal Year, for a total amount of $4.6 million.

– The board approved an intergovernmental agreement to borrow the old Doraville School Bell from the City of Doraville. The bell will be housed at the new Doraville United Elementary School.