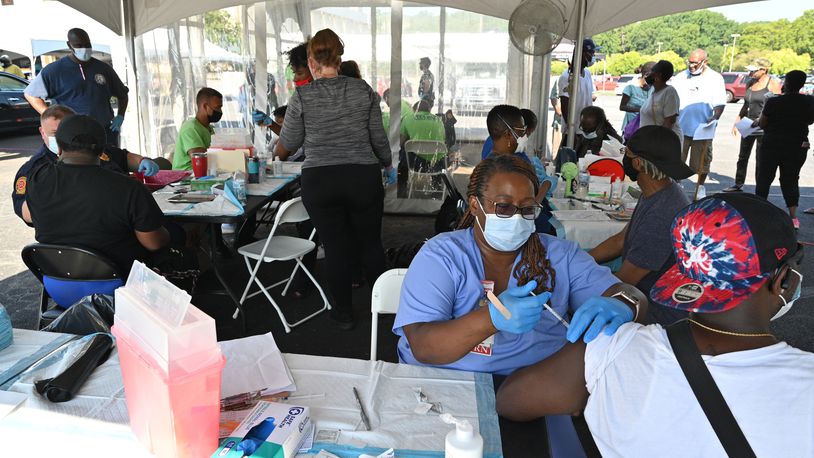 Hattie Ross, a registered nurse with the DeKalb County Board of Health (foreground), administers the COVID-19 vaccine during an event at The Gallery at South DeKalb in Decatur on Saturday, August 13, 2021. More than 1,100 people were vaccinated. (Hyosub Shin / Hyosub.Shin@ajc.com)

DeKalb County is hosting another COVID-19 vaccination event this weekend — and will again offer anyone who gets a shot a $100 prepaid debit card.

DeKalb was believed to be the first local government in Georgia to embrace such vaccination incentives on a large scale, and a similar event earlier this month resulted in more than 1,100 people getting vaccinated in one day.

“By using the right message, respected messengers, a convenient location and an attractive incentive, we are making different in the fight against this deadly virus,” DeKalb CEO Michael Thurmond said in a news release.

The new event will be held Saturday at The Mall at Stonecrest, 2929 Turner Hill Road in Stonecrest. Between 8 a.m. to 1 p.m., members of the DeKalb County Board of Health and DeKalb County Fire Rescue will vaccinate residents 12 and older.

Those getting shots can choose between Moderna and Pfizer. The latter vaccine received full approval from the Food and Drug Administration on Monday.

The vaccines are administered at no cost and participants can stay in their cars during Saturday’s event. Walk-ups are also welcome.

As of Monday, about 47% of DeKalb County residents were fully vaccinated, according to the state health department.

About 71% of DeKalb Asian residents and 55% of its white residents have received at least one dose.

Only about 39% of the county’s Black residents and 40% its Latino residents have done the same.

A previous event held at South DeKalb mall and this weekend’s event in Stonecrest are both targeting areas with large Black populations. Thurmond has previously said the county also hopes to hold incentivized events in areas with sizable Latino populations.

DeKalb is paying for its gift cards using federal American Rescue Plan funds. The cards are currently offered only at designated events like the one scheduled for Saturday.

While states, cities and counties across the country have tried lotteries and other incentives to raise vaccination rates, only a few local governments in Georgia have launched such programs.

The city of Clarkston has adopted a similar effort on a smaller scale. Augusta recently approved $100 gift cards for residents who get fully vaccinated.

DeKalb candidates qualify: 83 will run in dozens of city races