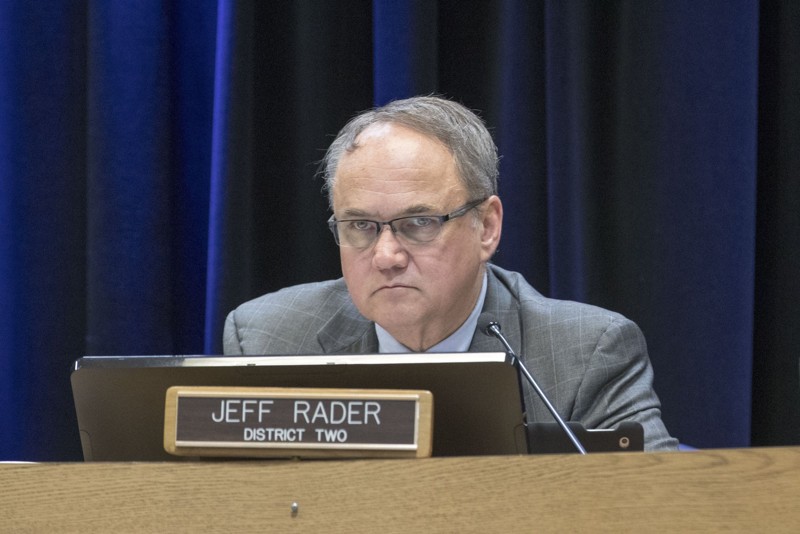 DeKalb County Commissioner Jeff Rader listens to citizens speak during a board of commissioners meeting in Decatur on March 13, 2018. ALYSSA POINTER/ALYSSA.POINTER@AJC.COM
By Tyler Estep

Rader introduced a resolution this week that would make it a DeKalb County policy to oppose development deals offering tax abatements that would result in the county getting less money than it needs to provide services to the finished project and its tenants or residents.

If adopted, the policy would also apply to the business dealings of the DeKalb County’s development authority. The resolution is largely inspired by one type of deal being offered by local cities, whose decisions don’t need the approval of the county but can have a significant impact on tax collections.

Rader pointed to a recent agreement orchestrated by the city of Doraville’s development authority, which offered $19 million in tax abatements to a developer building a $50 million apartment project to replace an aging shopping center. The deal means DeKalb County and its school system will not collect property taxes on the development for as long as 20 years — while the city’s development authority will pocket annual “payments in lieu of taxes” (PILOT) totalling more than $3.5 million.

“It becomes essentially free money to them,” Rader said, “but it all comes at the expense of the other taxing entities.”

Under Georgia law, local development authorities, whose members are appointed by elected officials in their respective jurisdictions, have the power to grant property tax abatements to encourage business growth. Counties and cities have long sparred over tax incentives and the effects that one jurisdiction’s decisions can have on others.

The city of Atlanta, Fulton County and their respective economic development arms have been at odds for years. In the city of South Fulton, a recent flap over incentives for a food distributor nearly resulted in the mayor being ousted by his city council colleagues.

The complaint is that one entity can make decisions that have an outsize effect on others, without their input.

“The DeKalb Board of Education continues to be concerned that local governments indiscriminately use monies intended to educate children as part of their economic development strategy,” board chairman Marshall Orson said in a statement Thursday.

Rader said payments such as those taken advantage of by Doraville can make deals struck by cities even less palatable for counties.

Clint Mueller is the legislative director for the Association of County Commissioners of Georgia, which advocates for the interests of the state’s counties. He said the organization has been monitoring deals involving PILOT payments.

“There’s no limit on it,” Mueller said. “It can be greater than the taxes that are being abated. In a sense they can take what could’ve been county and school money.”

But Doraville Mayor Joseph Geierman pushed back on the criticism.

“We are at a point today where it is hard to spark new development without offering some kind of tax incentive to developers,” he said. “Counties and their cities can argue back and forth about whether or not this is a good practice, but we ultimately need to play by the rules that have been set at the state level.”

Deals such as the one in Doraville are possible through bond-lease transactions, in which development authorities issue bonds to cover the cost of a project and then lease it back to the private developer — making the project eligible for abatements for which it wouldn’t otherwise qualify.

Rader has also criticized the DeKalb city of Brookhaven over similar deals. In 2016, he likened a deal between Brookhaven’s development authority and the Atlanta Hawks to a “kickback” scheme.

As part of the deal, which involved a $36 million Hawks practice facility in Executive Park near I-85, the basketball team received an $11 million break on property taxes that would have otherwise gone to schools and local governments. But the team also agreed to make annual $302,900 payments to the Brookhaven Development Authority.

Brookhaven Mayor John Ernst did not immediately respond to inquiries about Rader’s new resolution. But as the Hawks deal played out in 2016, he scoffed at the “kickback” characterization — while offering a less-than-enthusiastic defense of the process at work.

“We’re operating within state law,” Ernst said at the time. “Do we need to take a look at legislation? Probably so.”

Rader’s resolution was introduced Tuesday, but will shave to go through the commission’s committee process before being voted on by the full board. It’s not yet clear if he’ll have full support from his colleagues.

During Tuesday’s commission meeting, Commissioner Lorraine Cochran-Johnson called the resolution “a step in the right direction.”

“We do need to get a hold on many of the local development authorities and the decision-making process behind the deals that they broker,” Cochran-Johnson said. “Because they do in many instances have a detrimental effect on DeKalb, especially when they play with our money and it also hurts our local school system.”

DeKalb to Pass Out 10,000 Masks and Sanitizer to Fight Spread of COVID-19