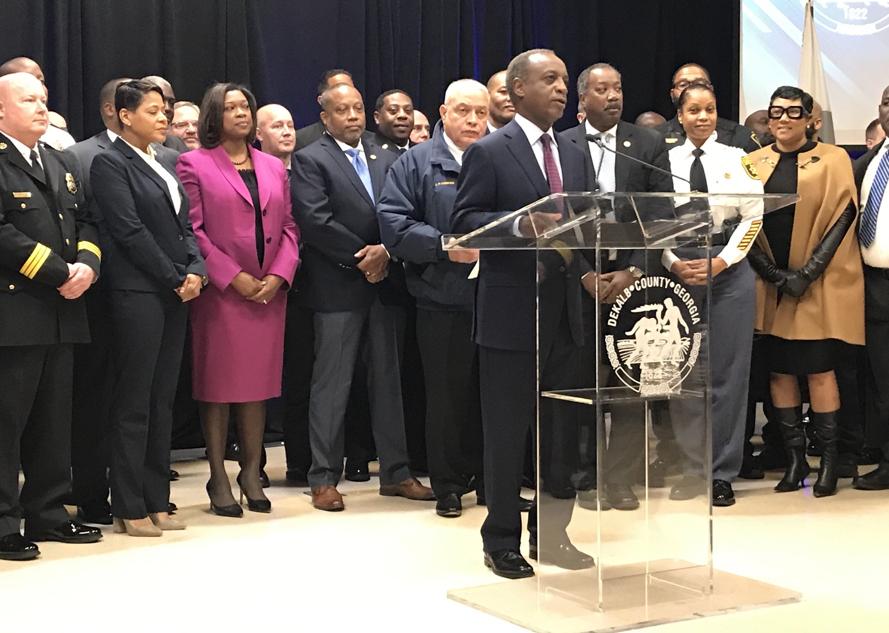 DeKalb County CEO Michael Thurmond speaks Thursday, Dec. 5, 2019, at a press conference to announce his proposal for 4% raises for public safety personnel in the county. TYLER ESTEP / TYLER.ESTEP@AJC.COM
By Tyler Estep
DeKalb commissioners approved the county’s 2020 operating budget on Tuesday — and suggested it could pave the way for a reduction in the property tax rate.
The $1.39 billion budget includes 4% pay raises for public safety employees, a 2% raise for other workers, and a cost of living increase for thousands of county retirees. It also includes the recent additions of funding for a new gang violence initiatives by the police department and district attorney’s office, as well as the delivery of new residential garbage containers for 43,000 residents.
The county’s rainy day reserve fund, meanwhile, will be bumped up to about $112 million, CEO Michael Thurmond said.
“This budget speaks to fiscal integrity,” he said.
All of it is possible thanks to a projected $20 million increase in county tax revenue. That has commissioners eyeing a possible mid-year reduction in the millage rate — which is used to calculate property taxes — for residents in unincorporated DeKalb County.
It would be the first millage rate reduction in several years. A determination won’t be made until tax digest projections are firmed up in the coming months.
“I’m looking forward to being able to support that in the mid-year,” Commissioner Nancy Jester said.
Colleague Jeff Rader, meanwhile, warned that an increase in utility fees for county residents could be coming. The adopted budget involves using reserves from water and sewer, sanitation and stormwater funds.
“Those fees have not gone up in several years, and the demands on them are real and are significant,” Rader said.
Read the original story on AJC.com.