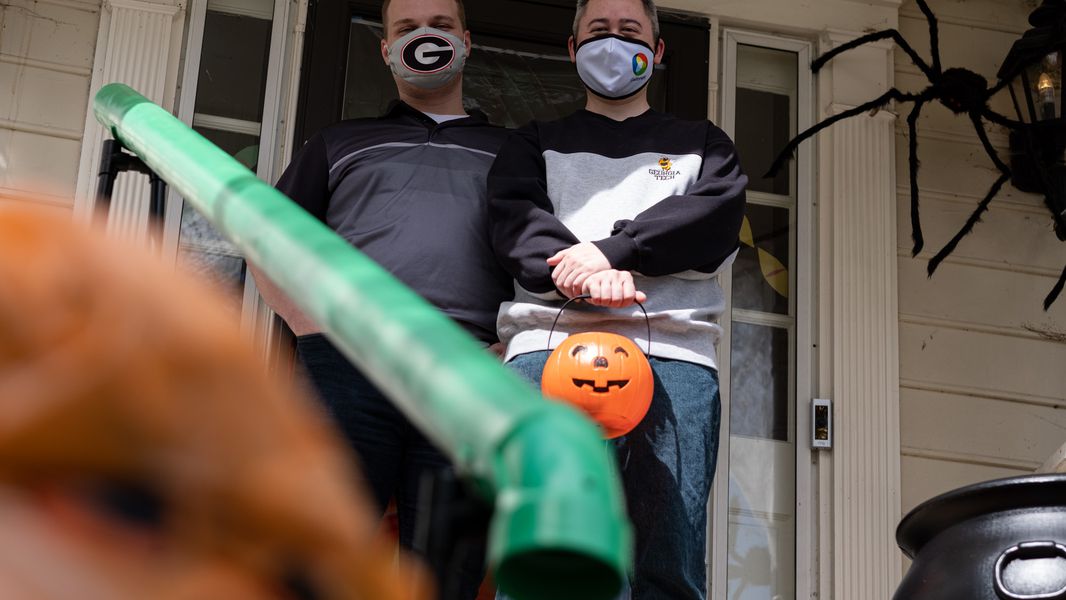 201016-Atlanta-Heath Hall, left, and Ben Ku aren’t sure how many trick-or-treaters they will get this year at their Tucker home, so they built a chute to deliver candy while keeping socially distanced on Halloween. Ben Gray for the Atlanta Journal-Constitution

Most years, Halloween is a mix of a little fear with a lot of fun. However, the threat of COVID-19 and super-spreader events has shifted how the holiday will look in 2020.

Many of the activities that are hallmarks of the holiday — trick-or-treating, costume parties and haunted houses — present serious risks, according to the Centers for Disease Control and Prevention. Positive COVID-19 cases are on the rise across the country, including Georgia, and many health experts worry that infection rates could continue to rise amid flu season and the holidays.

The pandemic has placed DeKalb County leaders and event planners in the tough situation of trying to balance Halloween festivities with safety, leading to many different approaches. Some have outright canceled activities and trick-or-treating, while others are hosting alternative events to provide a bit of a refuge.

“We started with the ultimate goal, which is that we want our community members to be safe,” Decatur City Manager Andrea Arnold said. “We also recognize that there’s a balance between making sure that people are safe due to COVID-19 but also that (Halloween) is an event that a lot of people look forward to.”

Large gatherings, such as Decatur’s annual Haints & Saints parade, have been canceled in favor of decorating contests and drive-thru events. Arnold said it became clear roughly a month ago that traditional Halloween events were not going to be safe this year.

However, she said some form of holiday activities are warranted to raise morale.

“There’s a mental health perspective,” Arnold said. “So much has been canceled this year, and I think that really weighs on people, so we want people to find a way to enjoy the holiday. We believe people can do it in a safe way.”

While the city is discouraging events that lead to large gatherings, Arnold said many community members are finding creative solutions. She said some residents are creating homemade candy chutes to get candy to children who trick-or-treat, while some neighborhoods are setting up trick-or-treat time slots for age groups to lessen the number of people on the streets at once. 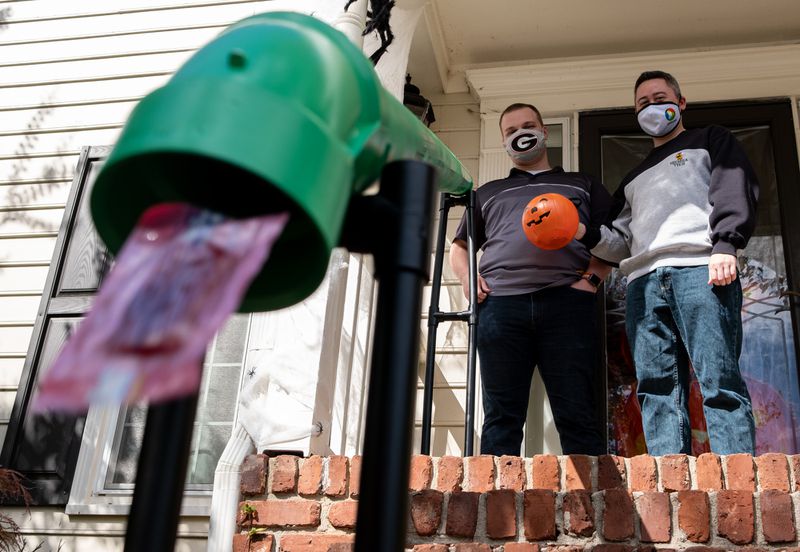 201016-Atlanta-Heath Hall, left, and Ben Ku aren’t sure how many trick-or-treaters they will get this year at their Tucker home, so they built a chute to deliver candy while keeping socially distanced on Halloween. Ben Gray for the Atlanta Journal-Constitution

Avondale Estates, which usually prides itself on large Halloween events, has taken a stricter approach by canceling trick-or-treating and dissuading its residents from participating. The only event the city kept is its Halloween Spirit Award contest, which is being judged virtually.

“It stinks,” Avondale Estates Mayor Jonathan Elmore previously said. “We are not endorsing or condoning Halloween activities. We do not want it to be a super-spreader event. We just want to keep people safe.”

Doraville, Dunwoody, Stone Mountain and other cities have shifted gears and are using vehicle-focused events to promote social distancing. The cities are having their own version of a truck-or-treat event, which features a drive-thru where candy is handed out directly to people in their cars. The CDC also lists these type of events as a higher-risk activity.

“The goal is to give parents and children an alternative so they don’t feel the need to go out and knock on people’s doors,” Doraville Mayor Joseph Geierman said, describing his city’s drive-thru event. “By announcing that the city is also accepting donations of candy, we’re also giving residents who want to give out treats a way to participate in Halloween without having to open their door for multiple groups of children.”

Dunwoody’s “Halloween Spooktacular Drive-Thru” is a joint event between the city and its police department. It’s a replacement for the city’s typical Halloween celebration on the last Thursday of October, which is also Dunwoody’s final “Food Truck Thursday,” Dunwoody Recreation Supervisor Rachel Waldron said.

“There was no way to do that safely,” she said. “We didn’t want to limit what is normally a huge event, so we decided that we’ll do what we can, put it in a car and be safe.”

For those who plan to go door-to-door or attend a truck-or-treat event, the CDC recommends everyone involved wear a mask, maximize their time outdoors and stay socially distanced. Instead of handing candy directly to children, the CDC advises that candy stations and individually bagged treats limit contact.

Georgia made more competitive by 1M new voters since ’16 election