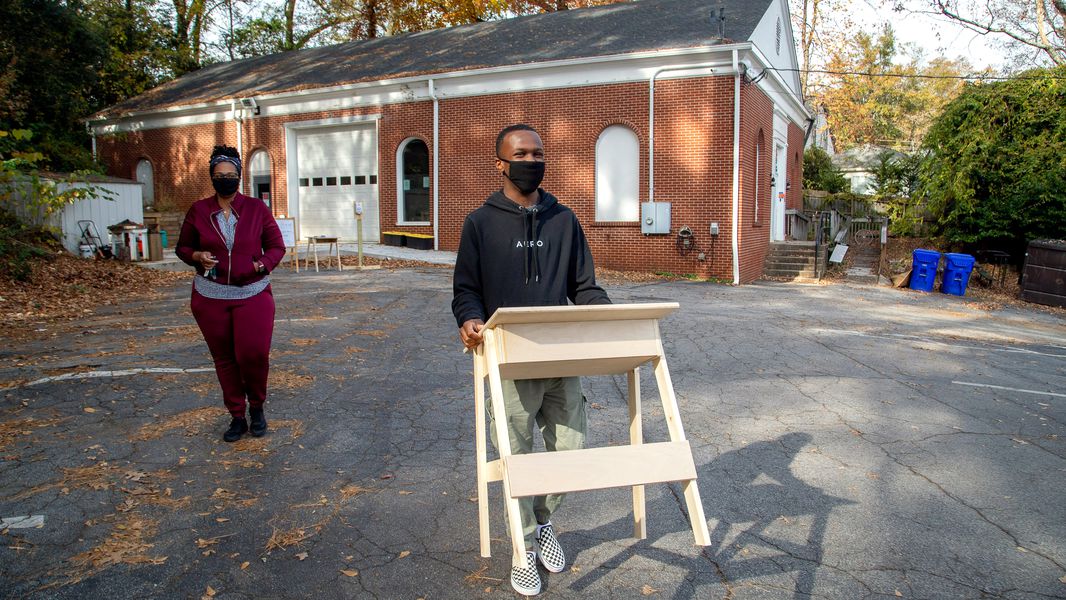 Nicole Gilbert and her son Samuel carry their new desk to their car after picking it up at the Decatur Makers on Friday, November 11, 2020. STEVE SCHAEFER FOR THE ATLANTA JOURNAL-CONSTITUTION

It’s a simple piece of furniture: Four legs and a tabletop big enough for two sheets of notebook paper.

But it’s exactly what hundreds of metro Atlanta students who need.

Since October, an all-volunteer crew from the nonprofit Decatur Makers has built hundreds of desks for students learning at home during the pandemic.

With each, another child gets a spot of their own to study. The desks replace beds and couches and kitchen tables cluttered with cereal bowls and shared with siblings.

Children required a place to do schoolwork. Woodworkers and other handy types who belong to the communal makerspace wanted a way to give back.

Within a few weeks of offering the free, hand-made desks, the organization had received 1,700 requests from area families. By early December, the group had raised nearly $14,000, enough to make more than 500 desks. They’ve already built more than 400 and plan to keep going. 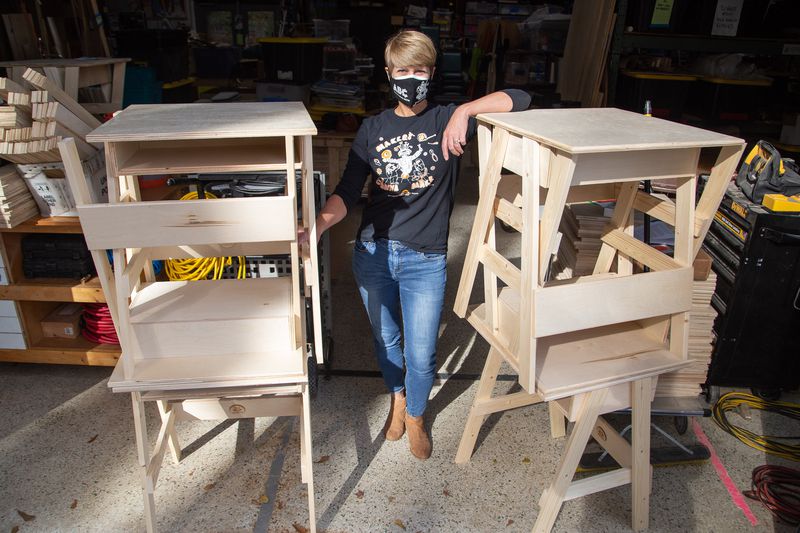 Decatur Makers Executive Director Irm Diorio stands next to some of the 300 desks that will be given to students who are doing virtual learning at home. Decatur Makers have made more than 300 desks. Steve Schaefer for the AJC

Keila Jones’ second grader is one of the recipients. She has homeschooled her eight-year-old son since kindergarten. He typically scrunches to fit at a squat little table more appropriate for a much-smaller child, or he sits on the floor or sofa while doing his work.

Jones knew he needed an upgrade.

“I’ve got to get my baby something because he’s getting too tall and this table’s too short,” said Jones, who lives in public housing in Decatur. “It was such a blessing because literally the day before I was looking at desks.”

Her son is “a tinkerer,” the kind of child who likes to pull apart and reassemble everything from coat racks to hammocks. He plans to help paint the desk red, his favorite color.

The Decatur Housing Authority received 25 desks to give to its clients who live in affordable housing sites. Executive Director Doug Faust said the feedback has been positive.

The children are “very happy.” As for the parents? They probably enjoyed getting their kitchen tables back, he said.

Another half-dozen desks went to the Decatur Family YMCA, which runs a school-day program that gives students a supervised place to go while they do their online classes. The program was full at 55 students with a waiting list of children it couldn’t admit.

Executive Director Stacey Stevens said staffers wanted to serve more children, so they cleared out a small conference room. Because of social distancing guidelines, they could only fit a handful of students into the space.

Plus, there was one other problem.

“Every table and desk we have in our Y is being used,” Stevens said. 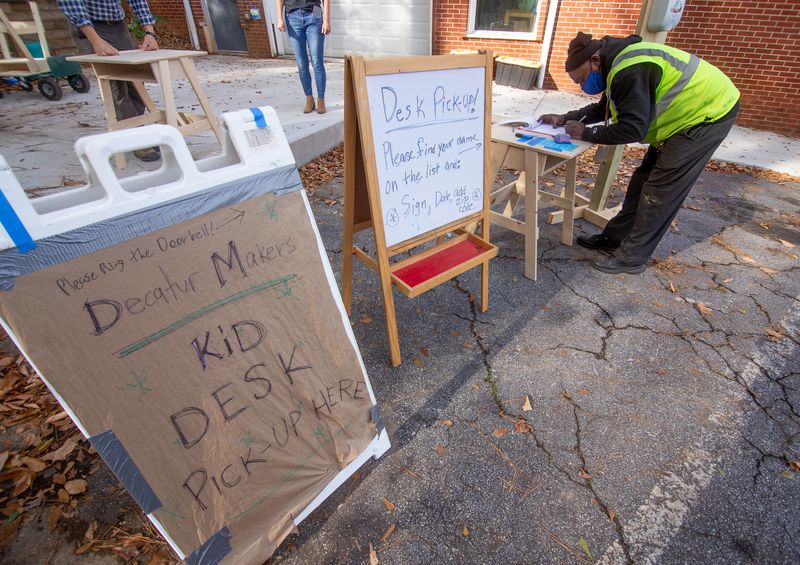 Mario McKee signs in to receive his desk at the Decatur Makers on Friday, November 11, 2020. STEVE SCHAEFER FOR THE ATLANTA JOURNAL-CONSTITUTION

When Tommy Barrow saw a news story about a man in California who had built desks for students, he knew Decatur Makers could do something similar.

A woodworker skilled at making benches, tables and other household furniture, Barrow examined photos of the California desks. He tweaked the design a bit so that it could be more easily mass produced and to be as efficient as possible with each sheet of plywood.

Each desk has a square top so that it’s faster to build— no fussing about which way is right or left, back and front. There’s a box underneath the tabletop to stash school supplies.

The materials for each desk cost about $25.

The volunteers work outside, with each person responsible for assembling a specific component. The more experienced woodworkers typically handle cutting duties.

With about eight or nine people assembling and cutting, the crew can build 48 desks in a day, he said.

Barrow has delivered desks to families who can’t pick them up. He’s driven from downtown Atlanta to Buford Highway and Stone Mountain.

And, the goodwill keeps spreading.

In suburban Chicago, John Haupt saw the Decatur group’s desks on social media and wanted to replicate them for needy students who live near him. Decatur Makers shared their design plans. Since then, Haupt said he’s built 25 desks with some help from a friend.

Barrow said he’s been amazed at the number of people who wanted a desk.

“That gives you some idea of how serious the need is,” he said. “How could you not respond when you realize how many people could use some help?”