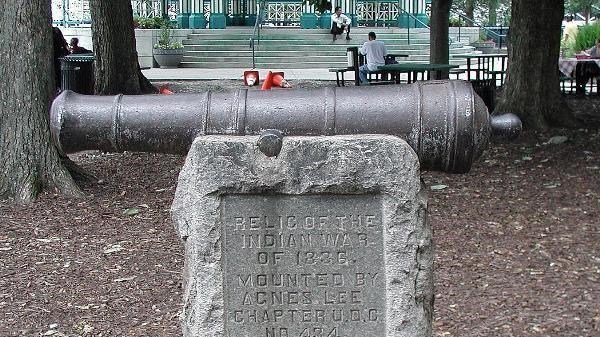 Decatur High School students are leading efforts to have a cannon from the Indian War removed from the Decatur Square.

The war relic, located in the city of Decatur but set on county-owned property, commemorates the 1836 “Indian War,” which is reported to be pivotal in the genocidal removal of the Muscogee (“Creek”) Nation from Georgia and Alabama.

Students and others in the community spoke in support of removing the cannon in an effort to support inclusiveness of all races and ethnicities in the city. The city led a similar effort that resulted in a Confederate monument being removed from the square in June.

“The cannon stands on the Decatur Square as if to honor the horrific acquisition of this land from the Muscogee Creek through terrible means and the continued use of violence against the Muscogee Creek Nation,” said Sophia Norton, a DHS student. “Not only does this outdated instrument of genocide not belong in Decatur, the white supremacy in memorializing it has no place in our community.”

City of Decatur commissioners approved a resolution Dec. 21 supporting DeKalb County Board of Commissioners’ removal of the cannon.

“Yes, this is a relic of war, but we as a community…a welcoming city, should not be supporting the reverences of it even as a relic in a place that is meant for all to feel welcome,” said Decatur Commissioner Lesa Mayer.