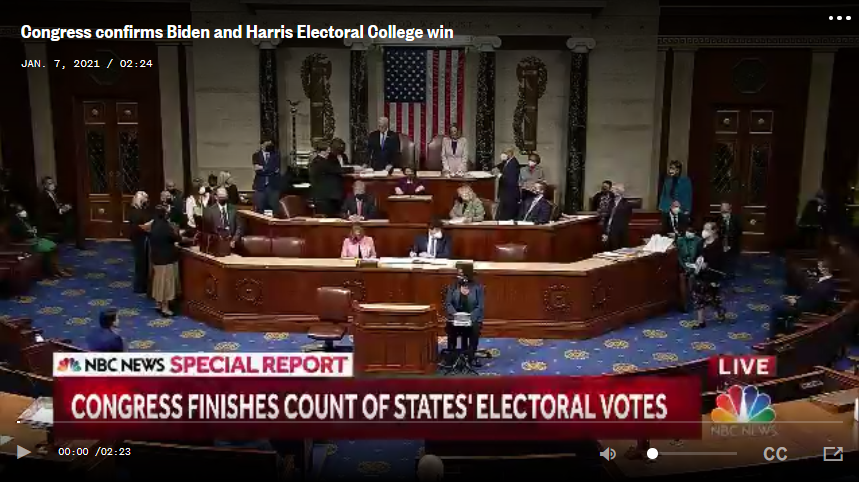 Overnight, Trump acknowledged the results of the November election but again made false claims about the vote.

The House and Senate reconvened overnight after they were forced to pause the official count of the Electoral College votes and flee when Trump’s followers stormed the building. The count of Biden’s 306 votes to President Donald Trump’s 232 was finished in proceedings that lasted until 3:40 a.m. Vice President Mike Pence read the totals to cap a somber end to an unforgettable day in Washington.

Minutes after, Trump acknowledged the results and said “there will be an orderly transition on January 20th.”

In a statement released by the White House, the president again made false claims about the outcome of the election but said that this month will bring to end “the greatest first term in presidential history.”

Twitter had suspended Trump’s account for 12 hours after he continued to push conspiracy theories about the election following the chaos at the Capitol. 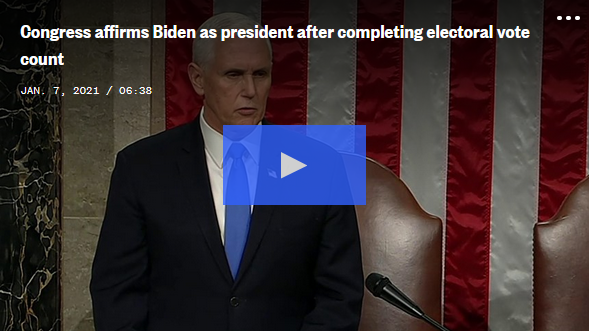 Earlier, lawmakers were forced to pause the official count of the Electoral College votes and flee when Trump’s followers stormed the building. A woman was shot inside the Capitol by a police officer and later died, the National Guard was activated and the mayor ordered a 12-hour curfew in the city that began at 6 p.m.

Three other adults died after what are believed to be some type of medical emergencies around the Capitol grounds, the Washington, D.C., police chief said.

The riots had interrupted debate in both chambers about a Republican objection to the Arizona results, which in the end was soundly defeated.

In reconvening the Senate after order had been restored, Senate Majority Leader Mitch McConnell, R-Ky., said the nation’s government had faced down greater threats than what he called an “unhinged crowd.”

“I want to say to the American people: The United States Senate will not be intimidated,” McConnell said. 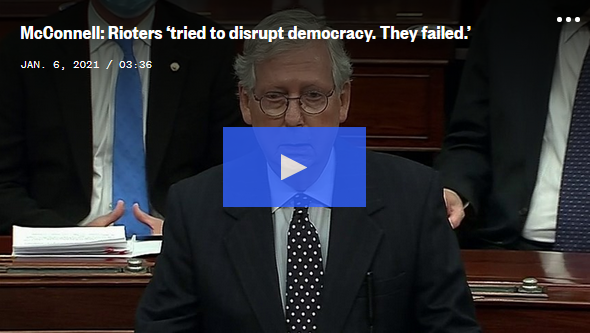 During the counting of the votes, representatives raised objections about some other states, but these were not entertained because senators either withdrew or did not sign on after the day’s chaos. Sen. Josh Hawley, R-Mo., signed on to an objection to Pennsylvania’s result but it was defeated in both chambers.

The senators who voted in favor of the Arizona objection were Hawley; Ted Cruz of Texas; John Kennedy of Louisiana; Cindy Hyde-Smith of Mississippi; Roger Marshall of Kansas; and Tommy Tuberville of Alabama.

The senators who voted for the Pennsylvania objection were Cruz; Hawley; Hyde-Smith; Marshall; Tuberville; and Cynthia Lummis of Wyoming; and Rick Scott of Florida. 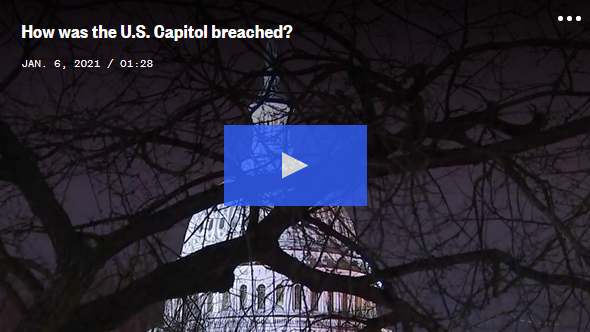 The chaos of the day appeared to leave a searing impression among lawmakers after they reconvened, including some Republicans who dropped their objections to counting Biden electors.

Sen. James Lankford, R-Okla., who had previously said he planned to object to counting Biden electors unless a commission was formed to audit the results, conceded Wednesday evening that his effort would fail.

Lankford had been in the middle of his speech supporting the objection against counting Arizona’s electoral votes when the Capitol was breached and lawmakers had to be whisked to safety.

“Obviously, the commission that we’ve asked for is not going to happen at this point, and I understand that,” Lankford said. “And we’re headed towards tonight — towards the certification of Joe Biden, who will be the president of the United States.”