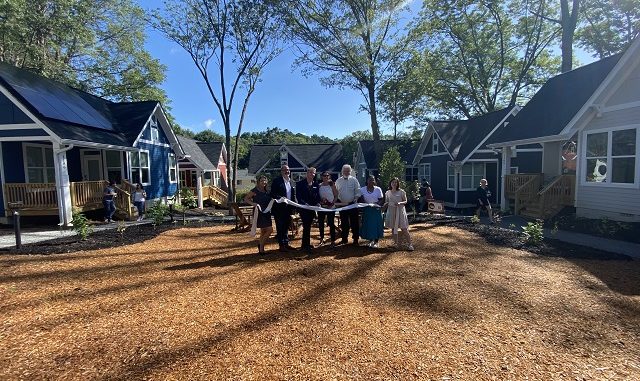 The ribbon cutting ceremony at Cottages on Vaughan on July 17 in Clarkston.

Hundreds of people gathered for a ribbon-cutting ceremony July 17 as Clarkston broke ground on an affordable housing neighborhood. The first micro-cottage community in Georgia, Cottages on Vaughan, includes eight homes and a green space. Each home is under 500 square feet and sold in the mid-low $100,000 range.

The climate-conscious community features solar panels and edible, regenerative landscaping, according to a press release from developer MicroLife Institute, an Atlanta nonprofit.

Terry, former mayor of Clarkston, worked in 2019 to approve zoning for a tiny home development.

“I’m thrilled to see this project come to fruition,” Terry said. “The goal of this project was to get innovative with our development ordinances to allow for a greater diversity of housing options. We recognize that the past 50 years of urban sprawl has segregated communities, contributed to climate change, and exacerbated housing inequality, and we can only start to address these challenges if we push the boundaries of what’s possible and start to rethink how we’re using space.”

“Every inch of this space was intentionally built to challenge our perception of space and make us reflect on how we can better utilize it,” said Will Johnston, founder and CEO of MicroLife Institute.

MicroLife Institute holds monthly tours of Cottages on Vaughan, with an introductory lesson on micro spaces and the design principles behind pocket neighborhoods. MicroLife Institute is also working on a micro cottage community for young mothers with Chris 180 on the westside of Atlanta.