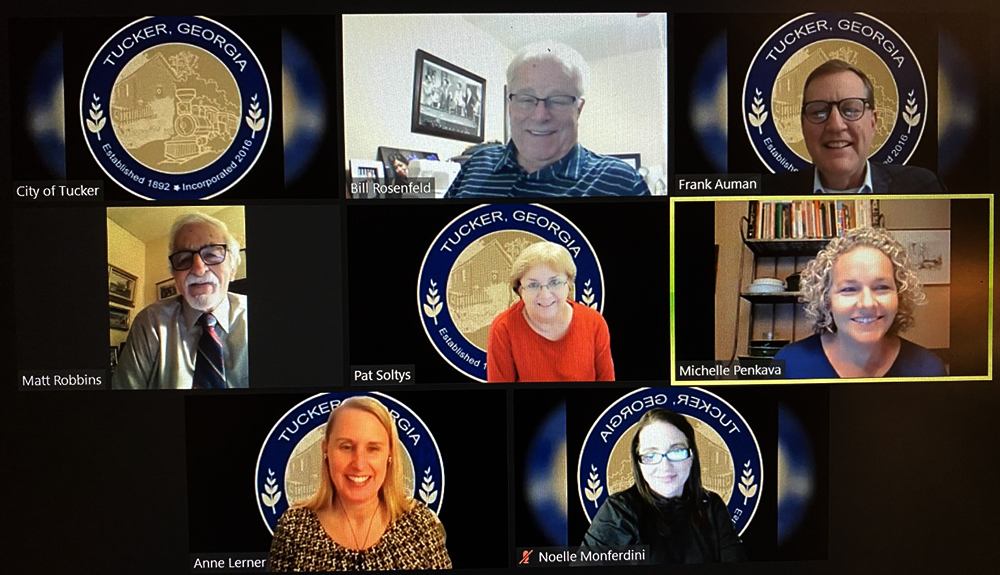 Tucker’s Mayor and City Council held a work session and meeting on Monday night, discussing a variety of topics of short- and long-term importance. The work session began with Mayor Auman presenting a proclamation to outgoing DeKalb County Commissioner Nancy Jester. The proclamation thanked Jester for her partnership and cooperation on numerous projects, including several to improve Henderson Park.

The first topic discussed was the City’s 2021 road resurfacing plan. The $4 million budget includes an estimated $2.7 million coming from SPLOST funds. The proposed list would see 58 of Tucker’s most poorly conditioned streets be repaved next year.

Council then heard a presentation on the plan to rehab the stadium at Fitzgerald Park. A representative from Keck & Wood, the firm responsible for design and engineering of the $4.9 million project, discussing a three-phase approach to creating a more usable stadium. The new stadium would include improved lighting, a scoreboard and sound system, and would accommodate 1,500 fans with expansion potential to a 5,000-seat capacity.

The next topic was a potential ordinance on urban camping. Planning and Zoning Director Courtney Smith discussed the issue of people living in tents and other structures in outdoor public spaces, as well as what other cities are doing to combat the problem. Tucker’s police liaison, Lt. D.G. Schoeppner discussed the idea of an ordinance being just one of many tools toward helping the homeless in Tucker.

Assistant City Manager John McHenry then made a short presentation to update Council on the CARES Act. To date, the City and its partners have distributed over 10,000 pounds of food to more than 200 households, as well as handing out over $800,000 for rent, mortgage, or utility assistance. More than 50 students are enrolled in virtual learning programs which have been aided by CARES Act money. In the small business grant program, nearly 300 applicants are being considered for grants up to $15,000.

Lastly, Council got a presentation on the October financial report. New Finance Director Robert Porche looked at revenue projections and how some of the revenues recovered in October.

Following the work session, Council held a brief meeting to deal with a pair of issues. The first was a bid award for construction engineering and inspection (CEI) services for upgrades at the intersection of Hugh Howell Road and Flintstone Drive. Council unanimously approved a contract for $86,850 with Atlas Construction. Next, they unanimously approved a resolution to appoint a prosecuting attorney. City Attorney Brian Anderson was reappointed in the role.

The next meeting of the Mayor and City Council will be on Monday December 14 at 7 p.m.

Read the original story on TuckerGA.gov.