This is a proposed map of Chamblee that includes a fourth district.

One of DeKalb County’s fastest growing cities plans to create a fourth council district to represent areas east of Buford Highway, a corridor known for its diverse immigrant populations.

On Friday, Chamblee released a map of the city that included four districts which will have to make its way to Gov. Brian Kemp’s desk for approval. The city of nearly 30,000 residents has annexed multiple properties over the past decade, adding thousands of new residents to its constituency.

At-Large Councilman Brian Mock said on Facebook that the city began reevaluating its districts after the city’s other at-large councilman, Darron Kusman, resigned in October ahead of a potential ethics investigation. A special election to fill that seat will take place in November.

No one in city leadership, which is currently comprised of a mayor, three district councilmembers and two at-large councilmembers, lives in the recently annexed areas, which Mock said deserves its own local representation.

“At the end of the day, we don’t go home over there,” his post said. “And folks deserve to have representation from their own neighborhood.”

The city added 12,000 new residents through a 2014 annexation. The city is roughly 34% white, 16% Black and 8% Asian, while more than 38% of residents have Hispanic ethnicity, according to the latest Census data.

He said that the annexed areas have lacked local representation because they’ve been absorbed into existing districts and sitting councilmembers can’t be redrawn out of their seats. Mock added that, “Folks on the east side were not inclined to run as the main voting block resides on the west side, making them feel as if (winning a council seat) would be unattainable.” 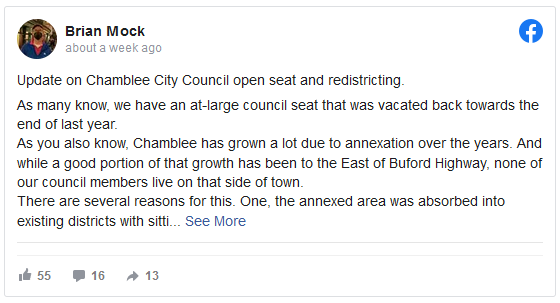 Chamblee worked with State Sen. Sally Harrell and the State Reappointment Office to create the new redistricted map. A news release by the city said the new district boundaries were created after reviewing census blocks, population centers and neighborhood communities of interest. City leaders also took natural boundaries, such as streams and large roads, into account.

Demographic information for the proposed district was not provided.

The map on the left is the current three City Council districts in Chamblee. The map on the right is the proposed four-district map.

The map will need to pass both houses of the Georgia legislature before being signed by the governor. If signed, an election will be held to fill the new council seat. City leaders said they hope the new map will be approved ahead of November, so the new district can hold its election alongside races for the mayor’s seat, the at-large seat and the District 1 seat.