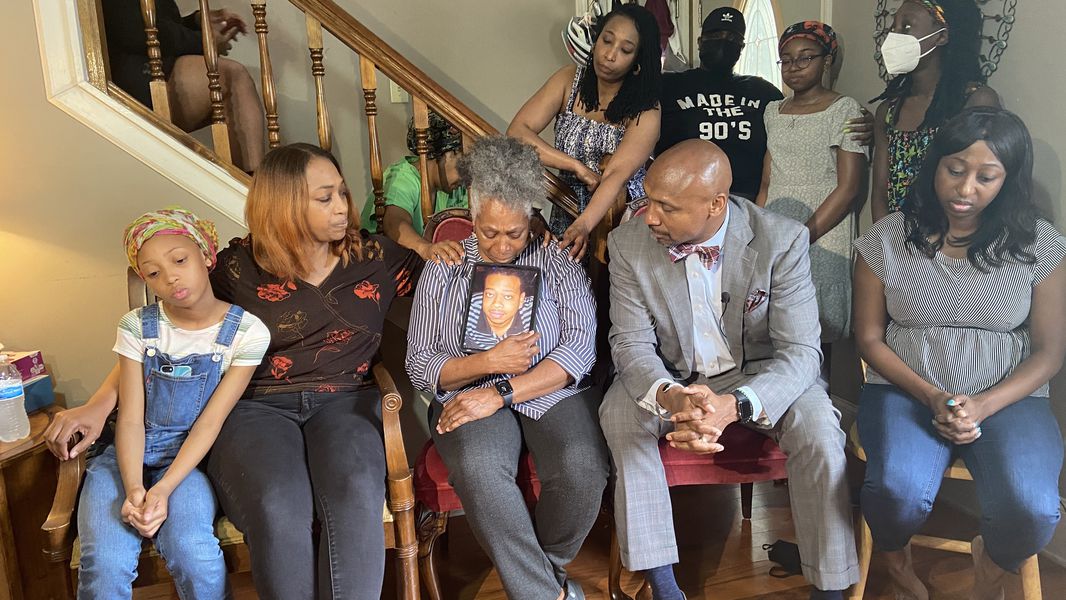 Matthew Williams’ mother holds up his photo as she is consoled by family members in her living room. Williams was killed during an encounter with police Monday at his DeKalb County condo. Credit: Shaddi Abusaid / shaddi.abusaid@ajc.com

Editor’s note: In a previous version of this story, the AJC gave an incomplete account of the content of 911 calls. Also, a statement in the previous version was incorrectly attributed to police.

Matthew Zadok Williams’ final hour began with frustration as he had locked himself out of his home, according to his sisters.

They say it explains why their younger brother was walking back and forth outside his DeKalb County condominium the afternoon of April 12.

“There’s a very suspicious man who’s been lurking around the woods around my house,” the person said during the first call.

The person called a second time and told the dispatcher, “I tried to walk to my car. He pulled a knife on me… There’s a man with a knife outside of my house and I need somebody there to take him away.”

Williams’ sisters say he was experiencing a mental health crisis.

“He has no history of violence,” said his sister, Zeporah Williams. She and two of her sisters, Hahnah and Buelah Williams, have reviewed more than 10 hours of police body cam footage. Zadok, as they called him, was the youngest of six, and the only son.

The footage appears to show one officer stumble outside the home as Williams chased after him with the knife. A second officer fired a single shot and Williams can seen falling to the ground before getting back up and running away.

The video appears to show officers kick the door open and fire a single shot into the home. They also apparently tried to use a Taser to subdue Williams, but investigators said it was ineffective.

“I don’t want you to die today. Put the knife down,” Sgt. Devon Perry is heard saying. “Let me see you throw (the knife) down. You throw it down, we’ll put our stuff down. Please, sir. I’m begging you. You’re a Black man. I’m a Black man. You don’t have to die today.”

Police eventually fired what sounded like three more shots into the home, according to the footage and a witness at the scene. After the shooting, the officers appeared to holster their guns and walk away from the door.

No one on the scene, including EMT personnel who were at the condo complex on an unrelated call, rendered aid. A pathologist hired by the Williams family said he believes Williams may have survived had he been treated immediately after the shooting. Police said they were waiting on equipment from DeKalb’s SWAT unit needed in case Williams had barricaded himself in his home.

Body cam footage shows the front door was open. Before he was shot, Williams hid behind an ottoman.

“This points to the need for increased training, in deescalation, and how to engage with people in mental crisis,” said Kalfani Ture, a professor of criminal studies and policing at Quinnipiac University and a former police officer. “We as police officers have the license to use deadly force, but we also have to be reasonable about this.”

“This is a tough situation because the officer has to make a split second decision,” he said of the DeKalb incident.

DeKalb police declined to answer specific questions about the shooting.

“There are many questions that are the subject of the ongoing internal affairs and GBI investigations,” read a statement from the county. “We don’t want to jeopardize these investigations.”

‘We’re coming in, open the door’

After he ran, Williams climbed into his condo through a bedroom window.

After consulting with other officers, Perry concluded they needed to find out whether Williams had been shot, footage showed.

Chadd Wilson, division director at the Georgia Public Safety Training Center, said typically a warrant is needed to force access into a private home. Exceptions include concern for human life, he said.

In the footage, Perry can be heard telling Williams officers were coming in.

“We’re coming in, open the door,” he said. They later kicked it open.

Williams was behind his door. He appeared to be no more than five feet from the officers.

“We’re just trying to make sure you’re okay,” one of the officers is heard saying. Williams is heard asking to see a search warrant.

Williams asked the officers’ names. Perry identified himself, Officers Mikhail Morgan and Michael Walker. Williams then pushed the door shut. One of the officers discharged a Taser. Perry fired three shots from his gun.

“He lunged at you or what?” the supervisor is heard asking Perry soon after.

“No, he, he was in at the door,” Perry responded. “I gave him the demand to put the knife down. He came at the door with a knife.”

Ture said Williams’ closing the door should not have been perceived as a threat by the officers.

After the shots were fired, Perry ordered officers to back away. A supervisor warned that Williams “could be in there bleeding out” but police waited for the SWAT unit to arrive.

“DCFR EMTs were on the scene and inquired about going in to render aid, but per policy, could not render aid until the scene was deemed safe by the police department,” said a county spokesman, who noted the International Association of Chiefs of Police’s definition of a barricaded person.

It says such a person has taken a position “that does not allow immediate police access.”

“These type of situations can be highly volatile and have the potential to endanger the lives of officers and others,” according to the IACP definition.

Hahnah Williams said the irony was not lost on her.

“They got in there first because they were concerned for his safety,” she said. “What happened to that concern? Did it disappear or did it never exist?”

Wilson, with the Georgia Public Safety Training Center, said there is not playbook for such situations.

“It’s at the discretion of the officers on the scene,” he said.

All of the officers involved remain on active duty. The family wants Perry fired and recently met with District Attorney Sherry Boston, who promised a thorough review.

“He didn’t know someone called police. He had no idea why they were there,” said Hahnah Williams. “He died not even knowing why.”