President Biden speaks to the nation when much of the Covid news is good — but the pace of vaccination has slowed. 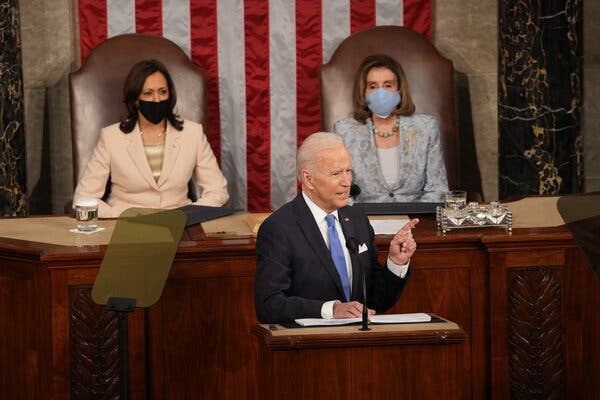 President Biden used the beginning of his speech to Congress last night to celebrate the speed of the country’s vaccination program. And he deserves a lot of credit for it.

After the program got off to a disorganized start under the Trump administration, the U.S. has now given at least one shot to more than half of adults. The only four countries ahead of the U.S. (other than tiny countries) are Israel, the United Arab Emirates, Chile and Britain.

But the U.S. vaccination program has run into some problems. The average number of daily shots has declined 20 percent in the past two weeks. 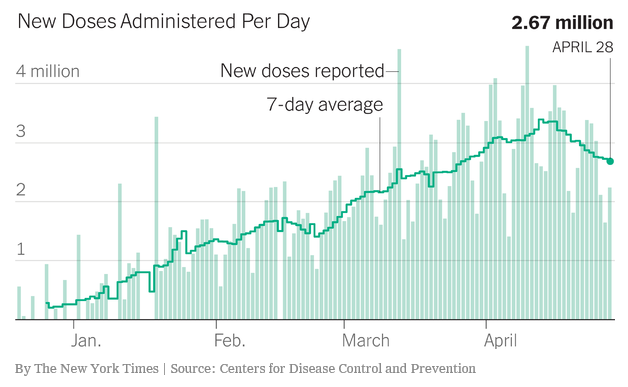 If vaccinations had continued on their earlier pace, about 10 million additional Americans would have received their first shot this month. The fact that they haven’t will lead to more Covid-19 cases, hospitalizations and deaths than needed to happen.

“There is still more work to do to beat this virus,” Biden said last night. “We can’t let our guard down.”

Why the slowdown? Some of it reflects a deliberate Biden administration policy. Officials recommended pausing the Johnson & Johnson vaccine, because of an extremely rare but dangerous blood-clotting disorder. The Food and Drug Administration called for the pause on April 13. The number of vaccinations began falling the next day.

Some medical experts believe that a full pause was an overreaction. When confronted with similar blood-clot risks with the AstraZeneca vaccine, regulators in Britain chose to issue a warning rather than denying the vaccine to many people who did not appear to be in danger and who would benefit.

The F.D.A.’s decision to end the pause on Friday suggests it ultimately agreed that the benefits of the vaccine outweighed the risks. Just as the Biden administration deserves credit for much of the overall success of the vaccination program, it also bears some responsibility for the slowdown.

So has public opinion

But the Johnson & Johnson pause is not the only factor. Vaccine hesitancy also plays a role.

A poll last month by the Kaiser Family Foundation found that 20 percent of U.S. adults said that either they would not get vaccinated or would do so only if required. Another 17 percent said they wanted to wait until the vaccine had been available longer and they could see how it affected others. Put those two groups together, and you can see that the country is starting to run low on unvaccinated adults who are eager to get a shot.

In Mercer County, Ohio, on the border with Indiana, people used to show up at the end of the day to claim any leftover shots. Recently, though, Mercer has had to throw out some doses, Jason Menchhofer, the county health administrator, told The Times.

When I spoke with Ron Klain, Biden’s chief of staff, about the vaccine slowdown, he emphasized the role of hesitancy. “We’ve got people who are less eager,” Klain said. “We know we have to make the shot more convenient, particularly for younger people.”

To do so, the administration is increasing the number of pharmacies that can give the shot, to about 40,000, and will soon start urging them and other vaccine clinics to move to a no-appointment system; people will simply show up and get a shot, as they already can in New York City. The White House also wants employers to offer shots at work and colleges to offer shots to students. The reintroduction of the Johnson & Johnson vaccine is also likely to help.

“As people see the benefits to being vaccinated, I think we’ll continue to see progress,” Klain said.

That seems correct. The number of Americans hesitant to get a shot has declined substantially since December, Kaiser’s polls show. And the vaccines continue to work phenomenally well. Fully vaccinated people rarely get Covid and almost never get a serious version of it. In Britain and Israel, Covid deaths have fallen more than 97 percent in the last three months.

In the U.S., the vaccination slowdown is alarming precisely because of how bad Covid is and how powerful the vaccines are.