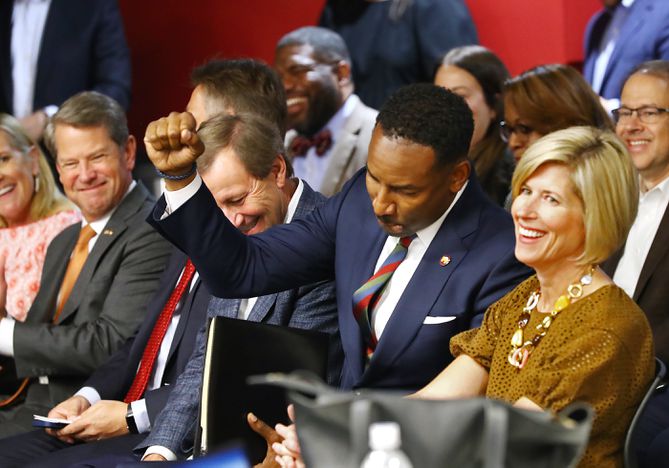 One of the world’s biggest and most-watched sporting events is coming to Atlanta in four years.

“The world will be watching as we meet this moment,” Georgia Gov. Brian Kemp said during a news conference at Mercedes-Benz Stadium following FIFA’s nationally televised announcement from New York. Kemp said the World Cup will be “one of the most impactful events in our state’s history.”

Atlanta Mayor Andre Dickens also joined the celebration. “FIFA has found out something that we’ve already known for a little while here in Atlanta,” he said. “Atlanta is a soccer town.”

FIFA’s announcement capped a five-year process in which cities across the United States, Canada and Mexico competed to host parts of what will be an expanded 48-team, 80-game tournament televised around the globe.

In all, 11 cities in the U.S., three in Mexico and two in Canada were chosen. Decisions won’t be made until next year on how many matches (likely four to six) or what level of matches each selected city will get.

The original North American bid to FIFA, submitted in 2018, included a non-binding recommendation of Atlanta as a possible site for one of the semifinals. Atlanta Sports Council President Dan Corso said that remains the local bid group’s goal, but he doesn’t expect a decision to be made on that issue until about a year from now.

Dickens said he would like for Atlanta to host the “biggest matches.”

The city also has been mentioned as a possible location for the World Cup’s international broadcast center, and Corso said he expects to “re-engage” with FIFA on that “hopefully this summer.”

Thursday’s announcement came as no surprise here as Atlanta, which previously hosted the 1996 Summer Olympics and three Super Bowls, long was considered likely to land one of the World Cup host berths.

“I think our story for large-scale events and certainly global events is one that is hard to beat and very advantageous to us,” said Corso, the leader of the local bid group. ”Our narrative as a sports-event destination speaks for itself when it comes to the facilities and the hospitality and the amenities.” 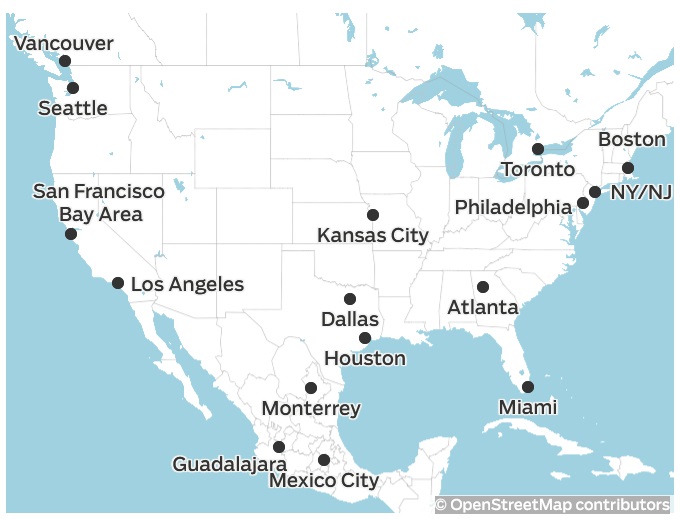 FIFA announced its chosen cities geographically, starting with the West region, then with what it called the Central and finally the East. It caught the Atlanta bid group by surprise to hear the city’s name called with the Central group.

“I checked my phone a little while ago, and my counterpart in Houston said, ‘You almost gave me a heart attack when they announced Atlanta after Dallas,’ because he thought that perhaps Houston was bypassed,” Corso said. “We heard Atlanta, and then we all went crazy.”

The games in Atlanta will be played at Mercedes-Benz Stadium, where the artificial turf will have to be temporarily replaced with natural grass for the summer 2026 event, as required by FIFA.

Dietmar Exler, chief operating officer of Mercedes-Benz Stadium, said stadium officials have had “intense discussions” with FIFA about the turf-to-grass conversion. He said the grass likely will be installed in February 2026. The retractable-roof stadium will return to an artificial-turf playing surface following the World Cup. 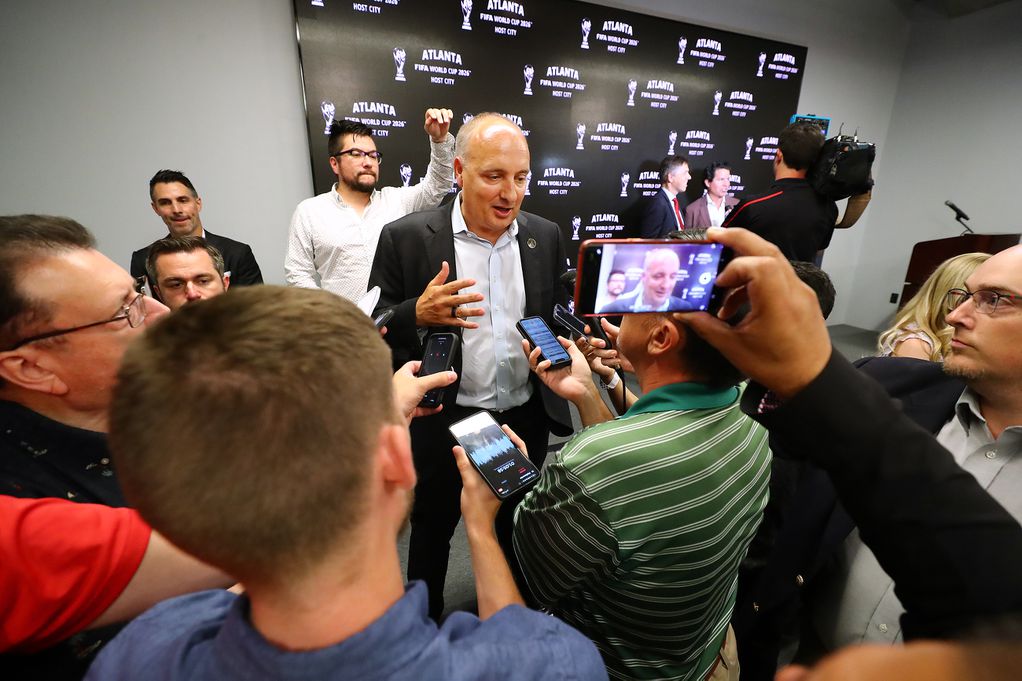 Corso said he expects the costs of hosting World Cup matches to be similar to – but likely higher than — hosting the Super Bowl and to be covered by a combination of public and private funding.

“I would tell you probably a good conservative estimate that we’ve heard from other cities,” Corso said, “is in that $50 million to $60 million range because of the magnitude and the scale of the event.”

Atlanta’s bid for the 2019 Super Bowl at Mercedes-Benz Stadium placed a $46 million price tag on hosting that event – about $20 million of which came from the private sector, $16 million from a portion of the Atlanta hotel-motel tax designated for major events and $10 million from a sales-tax exemption on tickets. The same sources, in unclear amounts, are part of the game plan for funding World Cup matches here. The Georgia Legislature acted this year to remove the sales tax on World Cup tickets.

On the other side of the ledger, Corso said the World Cup and its ancillary events will be a boon to the area’s tourism industry and will generate global media exposure for the region. 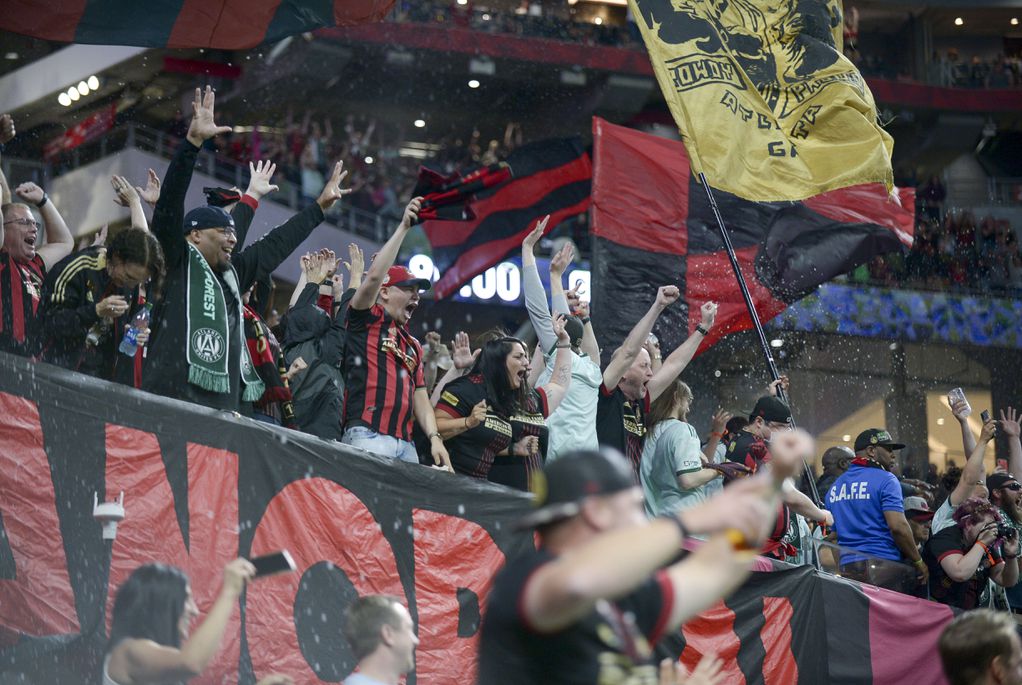 Atlanta United fans celebrate a goal on May 7, 2022 at Mercedez-Benz Stadium. (Daniel Varnado/For the Atlanta Journal-Constitution)

Efforts by the Atlanta Sports Council to be part of the 2026 men’s World Cup date to July 2017. Member nations of FIFA voted in June 2018 to award the event to a joint bid submitted by the United States, Canada and Mexico, putting it in North America for the first time since 1994. But FIFA had left open until Thursday the question of which cities would host matches, with 23 cities competing for spots.

Landing one of those spots is “a great shot in the arm” for the Atlanta hospitality industry, said William Pate, president and CEO of the Atlanta Convention & Visitors Bureau.

“Getting international visitors back here to Atlanta is such an important component of our visitation,” Pate said. “To have an event like the FIFA World Cup, where you get visitors who probably will have never been to Atlanta before, will be a great opportunity for us to show off the city.

“And then, of course, just the financial impact of having all those visitors in the city — it’s really going to be something.”