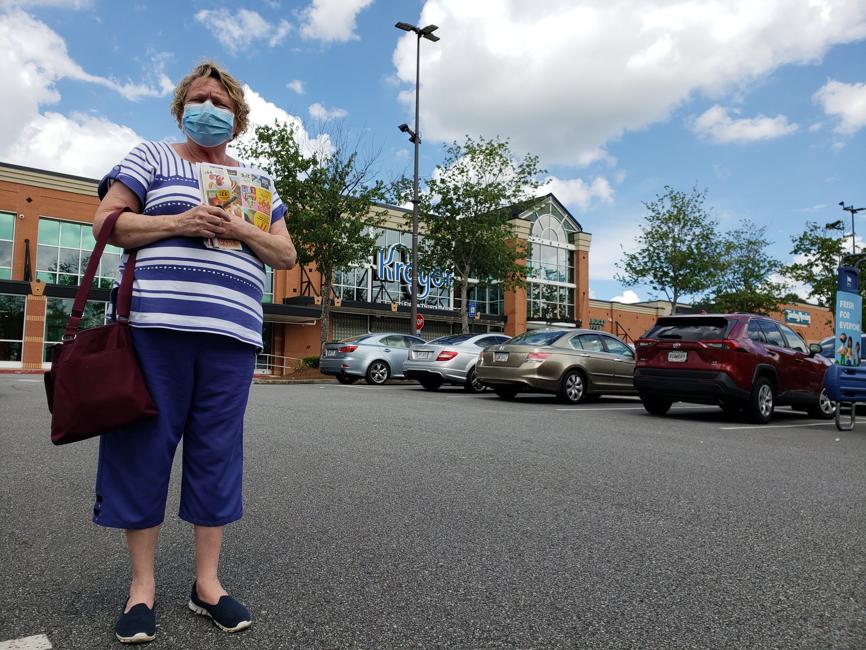 Becky Phillips wears a mask when she goes out to a north Fulton Kroger, convinced it will help protect others from the coronavirus. MATT KEMPNER / AJC

As more local officials wrestle with whether to mandate mask use in public, metro Atlantans are taking a clear stand with their own mouths and noses: Most already are wearing masks.

About 80% of shoppers wore face coverings inside local groceries during spot checks by The Atlanta Journal-Constitution.The informal checks were made this week of 100 shoppers in each of certain Kroger stores in Duluth, Johns Creek, South Fulton, Marietta, Lithonia and Atlanta.

But mask use varied by location: 91% of shoppers at a store off State Bridge Road in Johns Creek were wearing during the AJC’s review. Just 59% were at a Marietta area store off Powers Ferry Road.

And whether people were or weren’t wearing face coverings, their views were often nuanced. Public health officials say masks will save lives by reducing the chances of wearers spreading the new coronavirus to others. Gov. Brian Kemp has pushed against mandates but encouraged Georgians to use masks.

Officials in Atlanta,Brookhaven,East Point, Athens and Savannah have recently made public mask use mandatory amid sharp increases in the number of Georgia coronavirus cases and hospitalizations in recent weeks. Leaders in other communities, including DeKalb County, are considering similar moves. More than 90% of the metro area’s residents live outside the city of Atlanta.

Some shoppers with masks told the AJC they weren’t sure how much the face coverings help but they wore them out of respect for those around them. Others said they were convinced masks will save lives, but aren’t sure they want government mandates requiring them.

Meanwhile, some who weren’t wearing masks said they would do so if required and think they should be mandated. Others said they would oppose such steps, calling them unnecessary and infringements.

The biggest reason given for not wearing masks: They are uncomfortable and inconvenient.

“What the hell do I care if it is inconvenient if it saves somebody’s life? That is the most pitiful, selfish reason I’ve heard anybody utter,” she said.

She was happy that the vast majority of people wear masks at her local grocery, but said a mandate would improve participation. 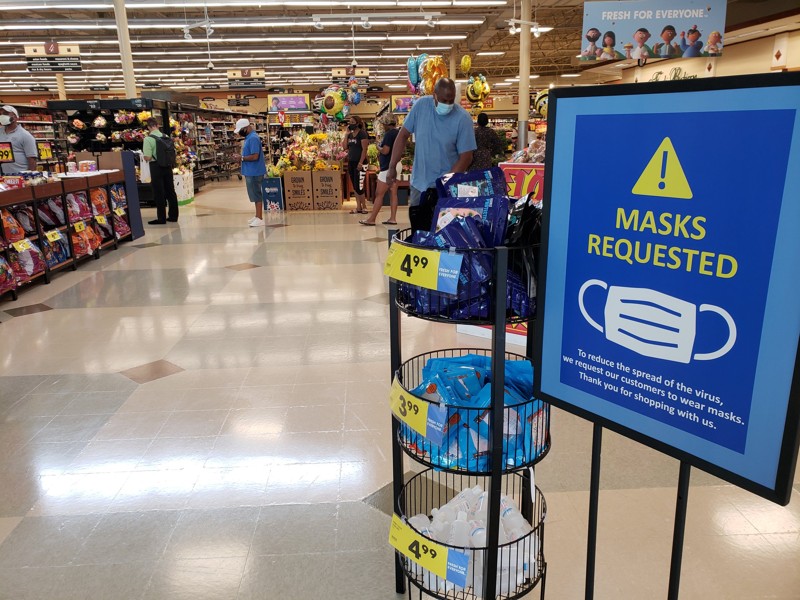 Kroger has installed signs at its stores in metro Atlanta, urging customers to wear masks. Meanwhile, some communities around Georgia have begun mandating mask use by the general public in some cases. MATT KEMPNER / AJC

In Gwinnett County, 26-year-old Steven Dickey didn’t have a mask on inside a Duluth Kroger. “I just don’t think I have that much exposure to need to wear one,” he said.

He doesn’t go out much and is avoiding large groups of people. At his office job in customer service, he’s required to wear a mask in common areas.

But he said Gwinnett has had a high number of confirmed coronavirus cases and believes a mask mandate is the right move. “I think it will help.”

Nearby, a 42-year-old woman loading groceries in her vehicle said she has a cousin who almost died from COVID-19. A co-worker was also infected. But she avoids masks, including on her visits to the grocery three times a week.

She said they are very uncomfortable. She worries they may prevent her from expelling enough carbon dioxide, believes her immediate family is good at fighting off disease and remembers that early in the pandemic, U.S. health officials said public mask use was unnecessary. She also doubts accounts of rising cases. And if a vaccine were ever developed, she said she wouldn’t get it.

“I don’t trust anything or anybody,” she said. She declined to give her name.

More than 2,300 COVID-related deaths in Georgia could be avoided by Oct. 1 if at least 95% of people wear masks in public, according to projections by the University of Washington’s Institute for Health Metrics and Evaluation.

Marybeth Sexton, an Emory University assistant professor of infectious diseases, is an epidemiologist who specializes in infection prevention and control.

“The more we learn about COVID, the more important it becomes that everyone wear masks,” she said.

Many people who have the virus show few or no symptoms, but can still infect others, Sexton said. “If somebody with COVID is wearing a mask, it dramatically decreases the amount of COVID they are likely to shed out into the environment.”

People can try different masks or make other adjustments to improve comfort, Sexton said. And she said numerous studies have shown wearing a mask “does not drop your oxygen level significantly, and it does not raise your carbon dioxide level significantly.” She pointed out that it is routine for some surgeons to wear masks eight hours or more while performing delicate operations.

Public health officials say is it likely that many people who have the coronavirus aren’t included among confirmed cases because they never got tested.

Who isn’t wearing masks doesn’t always fit a pattern. Some white-haired shoppers didn’t have masks on in stores, though the vast majority did. Most young shoppers did as well.

A young couple wasn’t wearing masks, but the man and woman both slipped plastic bags on their hands before touching fresh vegetables. Another unmasked woman picked through greens with her bare hands, bagging some, then putting them back in a bin before choosing another batch. Most Kroger employees wore masks, which the company said it mandates.

Kroger, like Publix, said it encourages all customers to wear masks and had signs at entrances and inside stores reminding shoppers.

Co-workers, family and friendscan’t always agree. Two uniformed DeKalb County firefighters walked out of a Lithonia Kroger, one wearing a mask and one not. They got into the same county vehicle. It was the same with Takeya Hale, who was wearing a mask but couldn’t convince her 24-year-old daughter Dionna Riley to do the same as they visited a Kroger off Old National Highway in the city of South Fulton.

Hale said a friend died of COVID-19 and two others went to the hospital because of the disease. She thinks mandatory mask rules are crucial, especially as she sees more people venturing out. But she sees mixed messages and outcomes from public officials. Atlanta Mayor Keisha Lance Bottoms said she was taking precautions but still caught the virus. President Donald Trump has often gone without a mask. “If he is not wearing it, am I really in danger?” 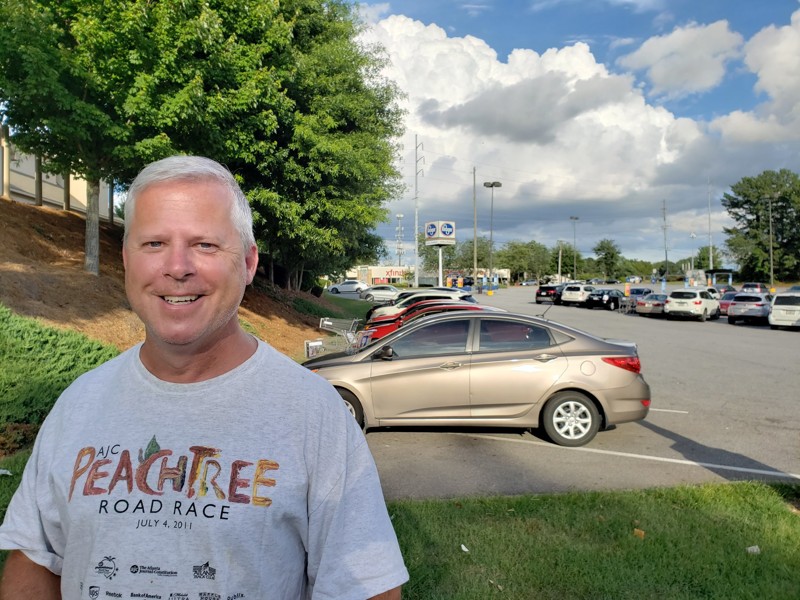 Chris Lenyszyn said he avoids wearing masks in public unless it is required to enter a business or medical office. He was recently at a Kroger store in Cobb County where masks are encouraged but not required. Lenyszyn said he doesn’t believe reports about recent increases in the number of confirmed COVID-19 cases and thinks people will rebel against any government mandates to wear masks in public. MATT KEMPNER / AJC

At a Kroger in Marietta, 51-year-old sports referee Chris Lenyszyn said he only wears a mask when required because he finds them uncomfortable. He doesn’t believe coronavirus is as serious as officials say, and thinks decisions should be left to individual preference. He predicts people will rebel if governments try to mandate mask use.

“People don’t want to be told what they can and can’t do,” he said. 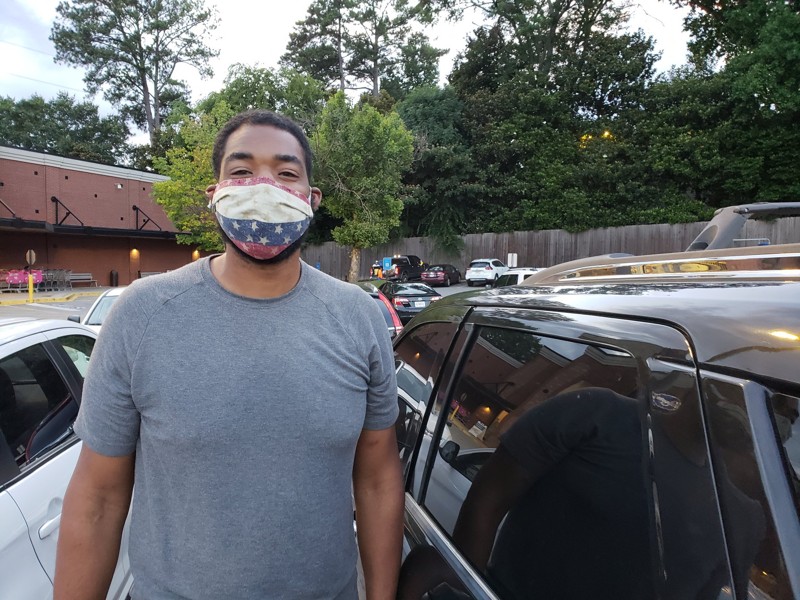 Walter Stith, a financial adviser in Atlanta and a former NFL player, said he wears a mask to protect loved ones and others from the coronavirus. With the number of coronavirus cases in Georgia spiking, he said he thinks mandatory mask requirements have become necessary. MATT KEMPNER / AJC

Outside a Kroger near Atlanta’s Ansley Park neighborhood, just a day before the mayor announced mask use would be mandatory, Walter Stith said he regularly checks federal and state sites for information on the virus. Trends in the number of cases aren’t moving in the right direction, said Stith, a Morgan Stanley financial advisor and former National Football League player. He worries not so much about his own health but that of his family and those around him.

Mandates are needed, he said, to protect the public because “people are not looking at the science and the numbers.”

Glenridge closed at I-285 for underpass construction