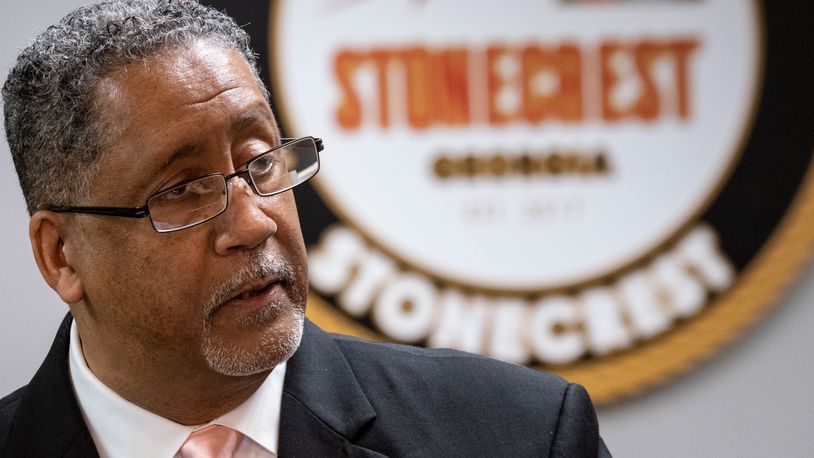 Stonecrest Mayor Jason Lary has been on paid medical leave for recurring cancer since mid-April, and it’s unclear when he plans or will be able to return to City Hall.

Due to city policy, he’s able to remain on leave with no financial penalty until he chooses to return. While on leave, city officials can not conduct any city business or spend city funds.

Lary has not been in contact with the city since announcing his leave at an April 15 news conference, when he also denied allegations of wrongdoing regarding Stonecrest’s use of federal coronavirus relief funds, according to the acting city manager. Lary is among those implicated in a bombshell report that alleges widespread misuse of $6.2 million, which led to several city employees being fired and replaced.

“I am not aware of any contact with the mayor regarding his leave status. Please contact him directly,” Acting City Manager Janice Allen Jackson told The Atlanta Journal-Constitution this week. Lary did not respond to multiple requests for comment, and his attorney, Dwight Thomas, said he had no update on the mayor’s health.

The city did not have an official leave policy on the books for the mayor or councilmembers until two months after Lary began his medical leave. City Attorney Winston Denmark, who also conducted the pandemic relief fund investigation, drafted the policy in mid-June, which passed unanimously.

“The member can declare a leave of absence for any reason,” Denmark said during a June 14 meeting. “I did not think it would be appropriate to get into evaluating an individual’s reason for wanting to be on a leave of absence.”

Denmark said the elected official would need to provide written notice to the city clerk to officially begin taking leave. The notice should include a brief reason for the leave and when the leave is expected to end.

City officials previously said Lary did not provide any written notice of his leave, aside from the news release announcing his April 15 news conference. On April 26, the City Council voted to formally accept Lary’s leave, shifting his mayoral responsibilities to Mayor Pro Tem George Turner.

Denmark said an elected official’s leave must last at least 72 hours, but he did not include a maximum length of time a member can be on leave. On June 14, Councilwoman Tammy Grimes questioned why there isn’t a cap, worrying that someone could take an indefinite leave of absence for no reason with no consequence after being elected.

“At my full-time paid job, I have to have documentation and I can only go a certain amount of time before (my leave) is either revisited or I have to come back in for a day and start over or something along those lines,” Grimes said. “I just don’t want it to be a free-for-all.”

However, Denmark said it would not be legal to stop paying an elected official, per the city’s charter. The annual salary for the mayor is $20,000; it’s $15,000 for each councilmember. Denmark also wasn’t comfortable forcing an elected official to return to City Hall while facing a grave illness.

Lary battled cancer twice since being elected as Stonecrest’s first mayor in 2017. He did not take any time off during his first bout, but he was given an excused absence for three months to battle lymphoma at the end of 2020.

The city charter says an elected official would forfeit their seat if they miss one-third of regularly scheduled City Council meetings within a three-month period without being excused. Denmark said any missed meetings while out on leave will not count toward that requirement.

The city’s new leave policy prohibits an elected official from performing any of their duties while on leave. Denmark said the only action they can take is announcing that they’re ending their leave-of-absence period.

“If an individual is on leave, they’re on leave. I don’t think we want them to cherry-pick their responsibilities and duties,” Denmark said. “It’s all or nothing. If you’re on leave, you can’t execute any of the duties of your office or take any official action whatsoever.”

On May 13, while on leave, Lary obtained cashier’s checks worth nearly $235,000 from a city bank account before returning the funds the next day. Stonecrest councilmembers weren’t aware the checks had been written until after a clerk called it to their attention.

The incident prompted the City Council to strip the mayor of his check-writing abilities, and it may have influenced the council’s decision to include that elected officials on leave can’t spend any city funds or have any city funds spent on their behalf.