There’s a 12-foot trench in the middle of Emerald Castle Drive. Machinery, dust and the not so faint smell of sewage are all around.

The sweaty men in hard hats wrap cable around a length of 12-inch iron pipe, then attach it to a hook that dangles from the bucket of an excavator. When the word is go, the excavator lowers the pipe deep into the earth. It’s secured in place, connected to the pair of smaller pipes that tie into nearby houses, then covered with rocks and such.

Huzzah. On to the next.

Just about a year ago, DeKalb County entered into a new agreement with state and federal environmental regulators — a redo, more or less, of a similar arrangement put in place a decade earlier to fix the 2,700-mile sewer system and stop polluting streams with millions of gallons of sewage.

Things haven’t been perfect, and there’s still a long way to go. The project on Emerald Castle Drive — a quiet, older neighborhood to the east of the I-285/I-20 interchange — is just one of dozens and dozens. It’s taken a couple months already and won’t be finished until mid-October.

There are vocal critics of the county’s efforts.

“The work is being done. Spill volume is down. And we’re bringing in new growth and economic opportunity,” he said.

Spilled sewage in waterways presents potential ecological and public health hazards through the spread of bacteria like E. coli.

In addition to effectively mandating the repair or rehabilitation of more than one-third of DeKalb’s entire wastewater system, the modified agreement initially identified 103 specific sites where repeat spills have occurred.

The county was ordered to fix them all within four years. Half were to be done in two years.

As of mid-September, right about a year after U.S. District Court Judge Steven Grimberg signed the new consent decree into action, 56 of the original priority sites had been addressed.

The agreement also called for any new locations with multiple sewage spills reported to be added to the list. DeKalb officials said this month that 60 sites had been added in the past year — and 42 of those had already been fixed.

All told, the priority fix list now includes 163 sites, 98 of which have are complete. That’s 60%, well ahead of the required pace.

“It’s a commitment to the community and to the environment,” said Maria Houser, an attorney and engineer who was hired in 2019 to serve as the county’s director of consent decree and environmental compliance.

A big part of the urgency is also tied to a component of the modified consent decree that wasn’t part of the initial arrangement. One that has implications far beyond the sewer system.

Spills in DeKalb are primarily driven by something called stormwater intrusion, a process by which rain enters the wastewater system through cracks in pipes and other imperfections. It can then overwhelm the system and force sewage back out of openings like manholes.

When the county makes repairs, then, it prevents intrusion and effectively creates more “capacity” for wastewater to be safely transmitted.

Under the new agreement’s “capacity assurance program” initiative, DeKalb gets a credit for a portion of that newly created capacity. It can then use those accruals to grant developers’ requests to connect to the system.

For years, many such connection requests stalled or were impossible to grant — especially in the county’s Snapfinger basin, a long underserved, predominantly Black area that’s also born the brunt of DeKalb’s sewer issues.

Since last October, 625 connection requests have been granted. More than a third had been pending prior to the entry of the new consent decree. The rest were new.

A total of 226 were for planned developments in the Snapfinger basin, which covers the southwestern corner of DeKalb and a thinner swath that stretches toward Tucker.

Those projects range from single-family homes and restaurants to medical buildings and mixed-use developments. They include Electric Owl Studios, an 17-acre film industry project off Redan Road, as well as a $260-million expansion of PepsiCo’s existing bottling plant in Tucker.

“It’s going to change the economic direction of our county,” Thurmond said. “You can see it already.” 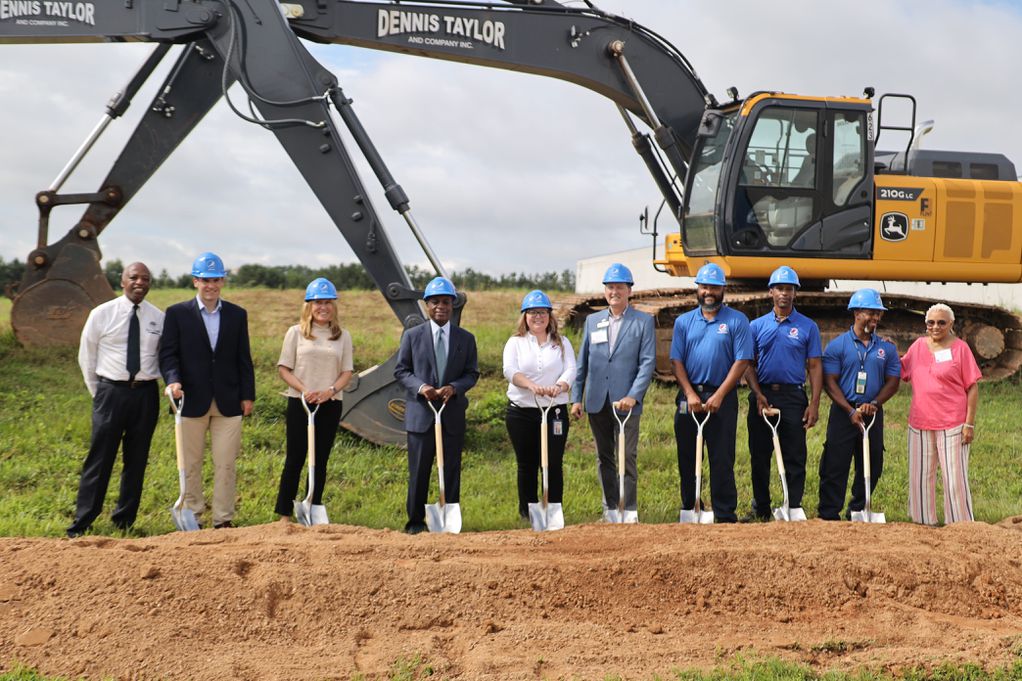 DeKalb County CEO Michael Thurmond (fourth from left) and other officials break ground on an expansion of PepsiCo’s bottling plant in Tucker.

A spokeswoman for the Georgia Environmental Protection Division said this month that her agency and federal counterparts at the EPA were “closely monitoring DeKalb’s progress” on the consent decree. She otherwise declined to comment.

That progress is easy to quantify with the aforementioned repeat spill sites. It’s a little more complicated with larger scale projects included in the “priority area assessment and rehabilitation” program (PASARP), the component that requires fixes to about one-third of the entire wastewater system.

The county says that, in the last year, it’s completed maintenance (everything from inspections and cleaning to other testing) on 5.8 million feet of pipe. It’s done “simple rehab” on more than 115,000 feet of pipe and “complex rehab” on another 15,000 feet.

About $92 million has been spent in the past 12 months alone. Another $22 million contract was approved Tuesday. Nearly $100 million more in water and sewer contracts will likely be awarded soon.

“When it comes to the [capital improvement program] and the consent decree, we don’t have the luxury of dropping any balls,” Commissioner Lorraine Cochran-Johnson, chair of the board’s public works and infrastructure committee, said during a recent meeting.

Many of the priority projects were begun years ago and are in various stages of completion. According to county’s most recent court filing, six were scheduled to be finished by the end of this year and range from 60% to 90% complete.

Not everything’s gone as planned.

Earlier this year, the county cut ties with one sewer contractor after The Atlanta Journal-Constitution reported that its founder was facing federal fraud charges.

An unrelated project to upsize sewer pipes in the Stone Mountain-area neighborhood of Sowell Estates was originally expected to start last September. It still hasn’t begun.

The problem there? Actually getting the 24-inch pipe necessary to complete the work.

The bigger the pipe the harder to get, she said. The county has redirected resources to other, less impacted projects when possible. 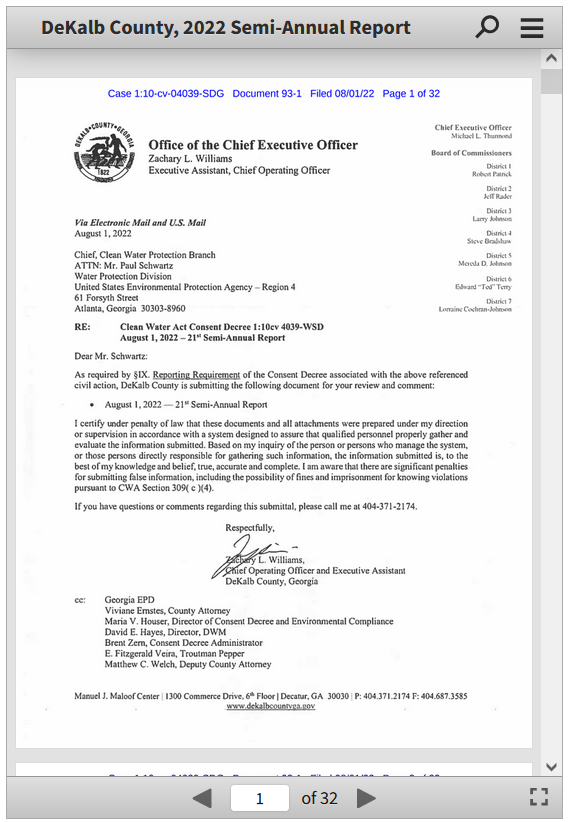 ‘Not out of the woods’

Given their primary cause, rainfall totals can drive drastically different volumes of sewer spills in DeKalb.

But the county reported 11.7 million gallons worth of spills in the first eight months of this year. The same period in 2021 saw similar amounts of rainfall — and about 5 million more gallons of spills.

Thurmond said “it’s clear” that repairs are starting to make a difference.

Echols, leader of the South River Watershed Alliance, isn’t so sure. The environmental advocacy group have battled with DeKalb over the sewer situation, and the proposed fixes, for years.

Echols has argued that neither the original consent decree or the recent modification go far enough in forcing DeKalb to comply with the Clean Water Act. While the new agreement includes requirements that the county assess and rehab parts of the sewer system outside the named priority areas, there’s no concrete deadline for addressing those sites.

“Without a deadline,” Echols said, “there’s no incentive for a municipality to fix pollution.”

Thurmond, who has repeatedly praised commissioners for their commitment to approving sewer-related contracts, said it comes down to “institutionalizing” the progress that’s been made. The CEO won’t be running for re-election in 2024 and addressing infrastructure has to continue to be “part of how DeKalb County operates,” he said.

The sewers, of course, aren’t the only battle.

The county is also investing hundreds of millions of dollars in repairs to the long-neglected drinking water system. And stormwater infrastructure (the stuff that helps capture runoff and prevent erosion in order limit stream pollution) is next on the list.

“I don’t know whether we were that close,” Thurmond said during a recent interview, holding a thumb and forefinger about an inch apart, “but we could’ve easily become Jackson, Mississippi.

“If we had stayed the course we were on, and continued to neglect the maintenance and repair and improvement of our water and sewer systems, I just know that for a fact.”