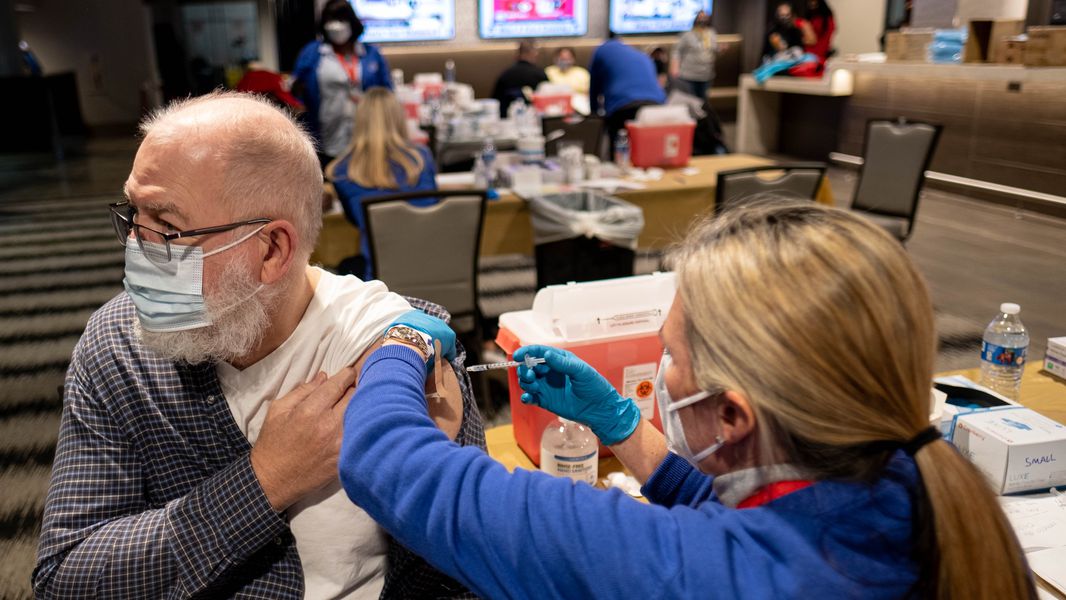 210116-Atlanta- Ronald Murphey looks away as he gets his COVID-19 vaccine during an event Saturday morning, Jan. 16, 2021, for Fulton County School employees and their spouses who are 65 and older at Mercedes-Benz Stadium. (Photo: Ben Gray for The Atlanta Journal-Constitution)

Georgia has hit two staggering statistics in the battle against COVID-19: more than 800,000 cases diagnosed and more than 14,000 deaths.

Rates of infections and hospitalizations are on the decline, but still not down to the levels they were before the devastating holiday surge. The death rate remains problematic, one of the highest in the nation.

Health experts continue to warn that another shoe could still drop. If residents let down their guard and one of the more-contagious variant strains takes hold, more havoc could follow, they say.

Gov. Brian Kemp faces pressure from Democrats and other critics to expand vaccine eligibility to frontline essential workers, such as grocery store workers, public transit employees and teachers. Kemp is struggling with a tight supply of doses while also seeking to reframe his image as a “vaccine governor.”

And Republicans are assailing U.S. Sen. Raphael Warnock and other Democrats, demanding they more assertively call for schools to reopen and questioning in a digital ad whether Warnock stands with “students or with D.C. Democrats and the teachers unions.”

Here’s a look at major developments related to COVID-19 over the past week. 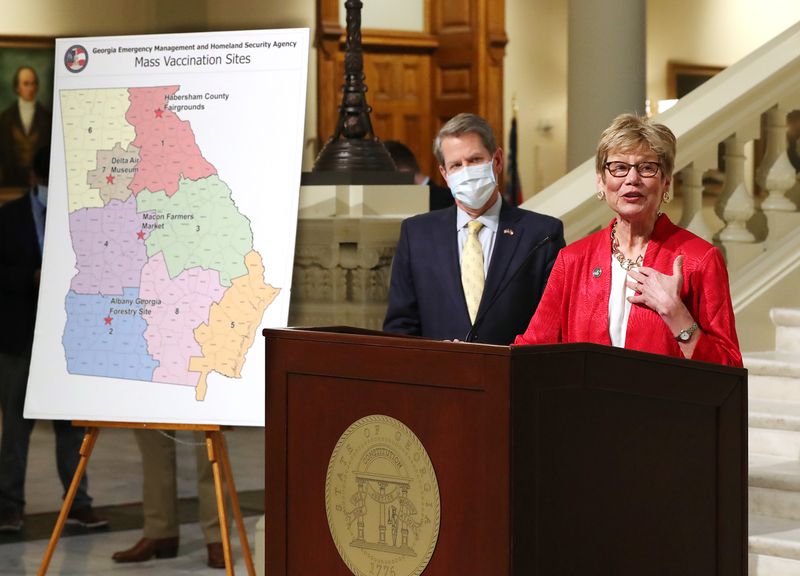 The sites, opening Monday, will initially dispense about 22,000 shots per week. Georgians can pre-register at myvaccinegeorgia.com for appointments, even if they’re not yet in the pool of eligible recipients.

Georgia, which now receives about 190,000 vaccine doses a week, is benefiting from a slight uptick in allocated doses after the White House announced it will distribute about 2 million more doses each week to U.S. states. That’s because of a shift in how the Pfizer vaccine is allocated. 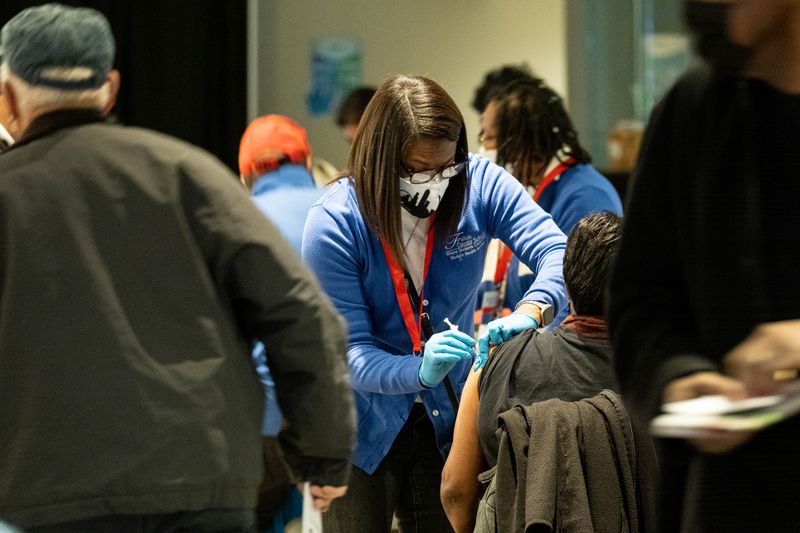 Registered nurse Aleve Reed administers a COVID-19 vaccine during an event in January at Mercedes-Benz Stadium for Fulton County Schools employees and their spouses who are 65 and older. (Ben Gray for The Atlanta Journal-Constitution)

Atlanta Public Schools’ leaders are making the case for COVID-19 vaccinations for teachers, even though more than 40% of school district employees who responded to a recent survey said they are hesitant or unwilling to take the shots.

Of the 3,766 survey participants, 719 said they would not take the vaccine. Another 915 said they weren’t sure about it, according to results obtained by The Atlanta Journal-Constitution through an open records request.

When APS began resuming in-person learning in late January, some teachers protested that classes should remain online until educators can be vaccinated.

Superintendent Lisa Herring said APS continues to ask state officials to open vaccinations to teachers. Teachers were pushed farther down the vaccination schedule after Kemp and his public health commissioner moved older Georgians ahead of them.

Kemp, in a Feb. 4 letter to the Atlanta school board, said there isn’t enough vaccine supply to begin inoculating teachers. He also wrote that schools can still reopen with safety measures in place.

The governor has stopped short of seeking to force schools to do so.

“Our kids need to be in the classrooms. I’ve held that position for a long time. We’re not going to waver on that issue,” Kemp said Thursday. “But I’ve left that up to the local control.” 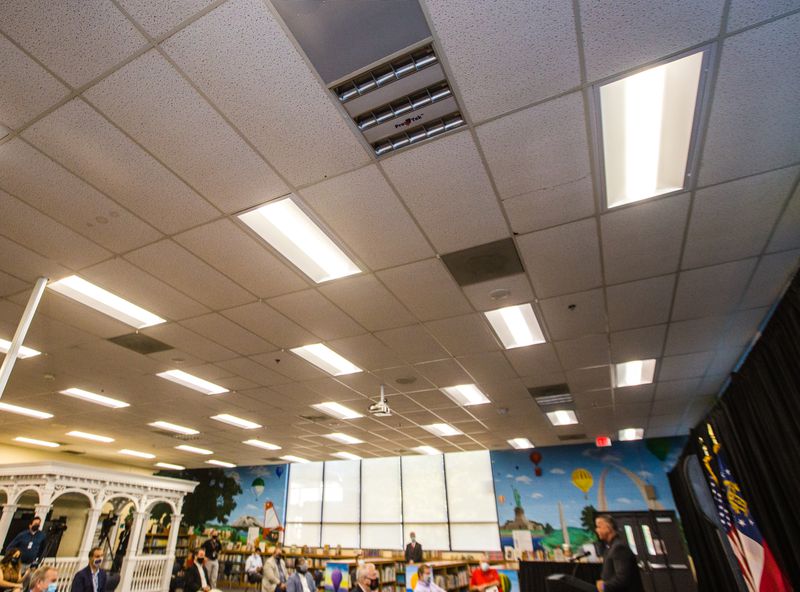 ProTekLife has installed ultraviolet disinfecting panels throughout Bryant Elementary School in Mableton. The technology automatically activates at night, eliminating viruses, bacteria, parasites and infections organisms in the air and on surfaces. (Jenni Girtman for The Atlanta Journal-Constitution)

The Cobb County School District plans to spend up to $12 million to purchase hand-rinsing devices and a product that uses low-voltage ultraviolet light to sterilize classrooms in its 67 elementary schools. Watching the Funds Cobb, a group made up of parents and others monitoring how the district spends taxpayer dollars, says the district has not provided any data to prove the equipment is worth the price tag.

Jessica Bergeron, a West Cobb parent, said the district could have spent the $12 million on personal protective equipment for teachers, staff and bus drivers; contact tracers who can help identify students and teachers who have been exposed to COVID-19; hazard pay for staff; and hiring more substitute teachers.

“Soap and water are an effective way to prevent COVID, and it’s a lot cheaper,” Bergeron said. 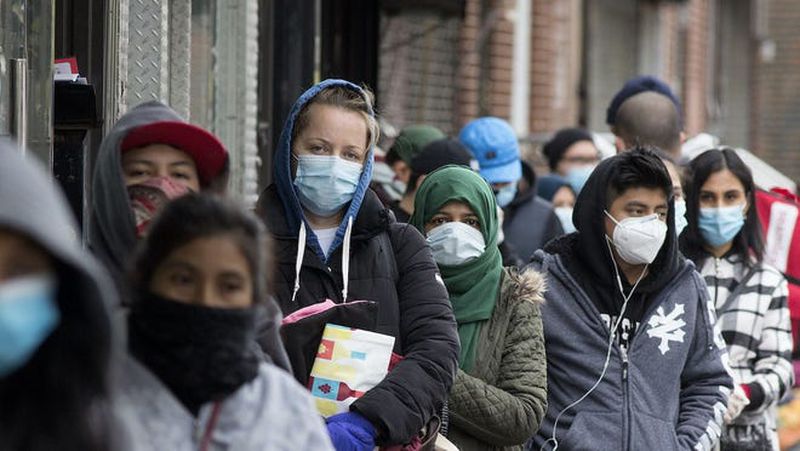 Though roughly 80,000 Georgians who have filed claims are still waiting to see if they are eligible for benefits, the Georgia Department of Labor now handles about 1,500 of those reviews a day, said department spokeswoman Kersha Cartwright. In August, the department could do only 900 reviews a day, she said.

Last week, 26,532 unemployment claims were processed, down 5,854 from the prior week. That’s nearly five times the average in pre-pandemic times.

The department has faced criticism during the crisis for being slow to handle claims, hear appeals and make payments to those who are eligible. Many jobless Georgians have complained of waiting months while bills pile up.

“We have devised creative strategies to make this process easier and faster,” Mark Butler, the state’s labor commissioner, said. “We have issued payments to almost half of Georgia’s workforce in the past 10 months while addressing an incredible amount of fraud.”