A Black DeKalb neighborhood, a ‘racist Exxon’ and a 66-day protest 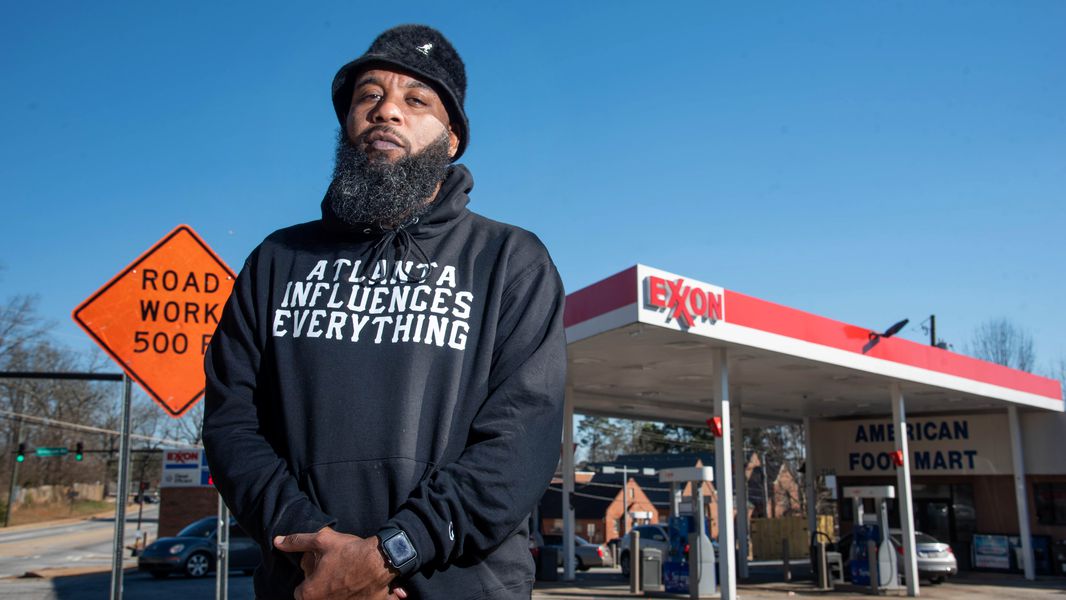 Rahim Sivji leaves the register, walks back to the stockroom and sits on a waist-high pillar of Sprite. He leans his elbow on a slightly taller stack of Coke and takes a deep breath.

Sivji has owned this Exxon station at the corner of Flat Shoals and Gresham roads — southwestern DeKalb County, not far from East Atlanta proper — for more than two decades. He’s still there seven days a week, does a little bit of everything. He says he wants to die working.

But on this warm day in late February, he says he’s under contract to sell the store.

Thedeparture is something short of voluntary.

For 66 days last fall, protesters were on the sidewalk outside the store, warning away would-be customers with a simple message borne on signs big and small: “BOYCOTT THIS RACIST EXXON.”

An employee of Sivji’s had been caught on video telling a customer that he didn’t “give a [expletive] about the Black neighborhood.” Sivji was then accused of calling one of the eventual organizers a “food stamp cockroach.” Other folks from the predominantly Black community chimed in with their own accusations of mistreatment over the years.

In another era, another time, it might’ve all been ignored or shrugged off. Things might’ve lost steam more quickly.

But emboldened by a summer of civil unrest and the racial reckoning sweeping across America, protest organizer Brian Page and his companions stayed on the corner and created a street-level movement: one demanding better treatment not just from police or political leaders, but better treatment from everyone.

And it seems to have worked.

“It’s a privilege to get our dollars,” Page says. “Respect is a bare minimum.”

Sivji maintains that he’s not racist and feels like he’s been mischaracterized and misunderstood. He questions the methodology — and sincerity — of some of the protesters.

“After the protest, business is back to normal,” Sivji says. “If there was something racial over here, they wouldn’t be coming back.”

Nevertheless, he says, he’s got a buyer and he’s getting out. 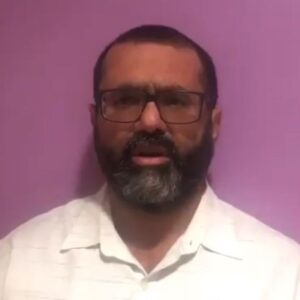 Rahim Sivji, the owner of the Exxon station at 2345 Flat Shoals Road in DeKalb County. SCREENSHOT VIA INSTAGRAM VIDEO

Page, 36, grew up in this neighborhood when the homes and apartments hadn’t aged quite so much and the gentrification bait — modern-looking new construction, renovations with colorful front doors — wasn’t creeping in quite so closely.

He learned to drive in the parking lot just down the hill from the Exxon, outside what was then a Kmart.

Normally a tour manager for a popular R&B artist, COVID-19 has all but halted Page’s work. So he was at home that day in October, scrolling through Instagram, when he saw the video: a clerk named Jimmy crassly telling a customer he didn’t care about the neighborhood.

Without much thought, he went down to the squat, brown plaster building he’d visited since he was a kid, the one with big barrels of beer and soda and sugary juices lined up inside. He started stopping shoppers as they approached the front door.

“We’re not spending our money here anymore,” he told them. “They don’t deserve our money.” 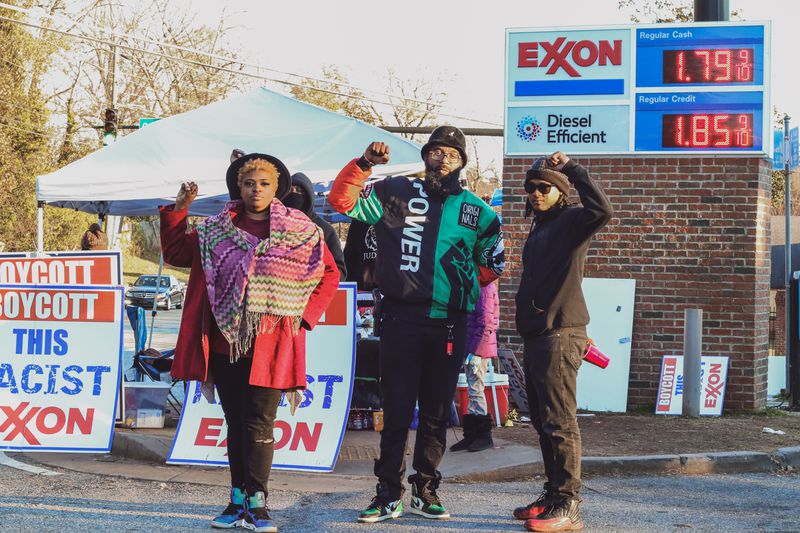 Page is not a full-time activist and started his protest largely on impulse and emotion. But Black buying power has often been used as a weapon to fight injustice and inequality, from the Montgomery Bus Boycotts of the 1950s to current day “buy Black” movements.

Sivji, at that point unaware of the incident involving his clerk, came out of the store to confront Page.

Sivji says he was threatened, a charge Page denies. Page says he was called a “food stamp cockroach,” a charge Sivji shrugs off as a barb slung in the heat of the moment.

Three days later, on Oct. 16, the official boycott was born.

By Day 14 of the protest, there’s a couch on the sidewalk on the corner of Flat Shoals and Gresham roads.

Page lies on it longways, one hand behind his head and one knee up, the sole of a black and white sneaker planted on the imitation brown leather. A blue Powerade on the ground next to him is largely untouched.

He’s taking a moment to breathe. 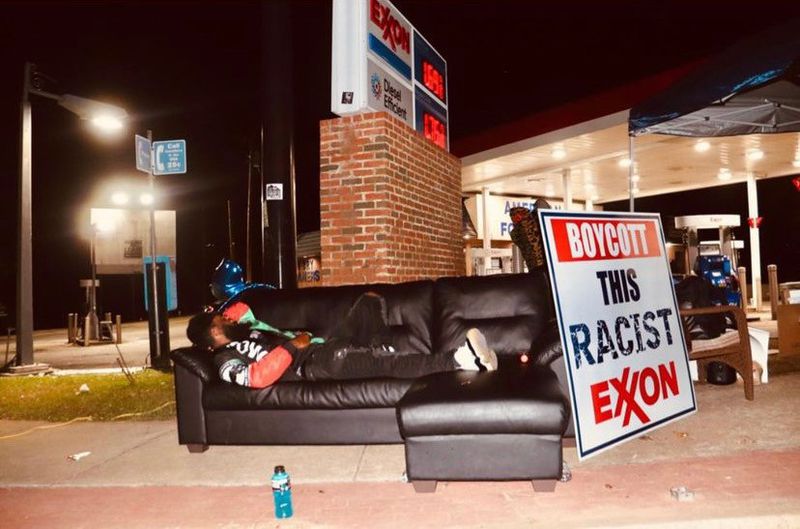 Brian Page, the organizer of a 66-day protest outside the Exxon station at 2345 Flat Shoals Road in DeKalb County, lies on a couch following a night of action in October 2020. SPECIAL PHOTO/ZACKERY WEAVER

There were recent days when he left the Exxon and went home and cried, thinking his efforts weren’t getting anywhere.

Sivji had also accused Page of being involved when another man allegedly solicited — and secured — a $5,000 bribe from him. Page vehemently denies any involvement, likening himself to Civil Rights leader Hosea Williams: unbought and unbossed.

He says that, if the other man took any money or made any promises to Sivji, he was acting on his own.

But that night on the couch, Page wasn’t thinking about any of that.

It was a Friday, and the protest had turned into a block party. There were DJs playing live music. There were tents and food and big blue balloons spelling out their desired outcome for Sivji’s business: R-I-P.

There were people, several dozen. The most yet.

“It just turned into a celebration,” Page says. “And in those celebrations we would take the time to expound on the importance of economics and the power that we possess as consumers.”

“It kind of turned into a competition to see how many people we could turn away,” says Meredith Minor, a neighborhood native and regular at the protests.

Support was not universal and the situation was often tense. At least one local woman filed a report with DeKalb County police, saying she’d shopped at the store for years and was tired of being harassed by the protesters.

For Page, though, this was the night when things started to feel momentous. 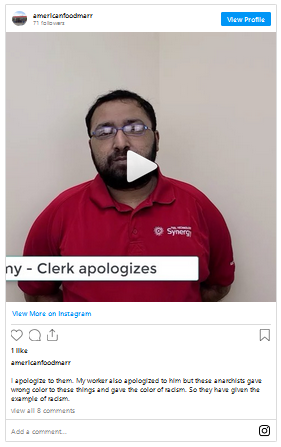 About a month into the protests, a video appeared on an Instagram account that Sivji set up to try and counteract the narrative put forth by Page and others.

Jimmy — the clerk whose real name remains undisclosed — stands against a white wall in a red polo-style shirt and glasses. He tells his side of the story, about the man who came into the store in the early morning hours wanting to buy beer.

Jimmy says he told him it was too late and he should go over to Fulton County.

“He said that, ‘I’m from this neighborhood and I’m a Black guy and this is my Black neighborhood.’ And he was talking very rough language,” Jimmy says.

“I got mad and I said something wrong about the neighborhood and all this. I really apologize to the neighborhood and everyone. Please forgive me. I work for this store for almost like 10 years, give me one more chance and I promise you that I will never make this mistake again.”

Jimmy was let go around the time his video was posted.

The protests continued — and media attention ramped up.

Page was often quoted in coverage as “Joe Jones.” He says he’d tried to go by “Jones” or “Scapegoat Jones,” the one-time rap name everyone in the neighborhood knows him by, in order to protect his family. There were rumors of retaliation, and it’s not unusual for activists to have their personal information uncovered and posted online by folks with malicious intent.

Page has a 7-year-old daughter and shares a legal name with his father.

He says a TV reporter suggested he just add “Joe” to the front of things and he went with it, figuring she knew what she was talking about. It stuck. 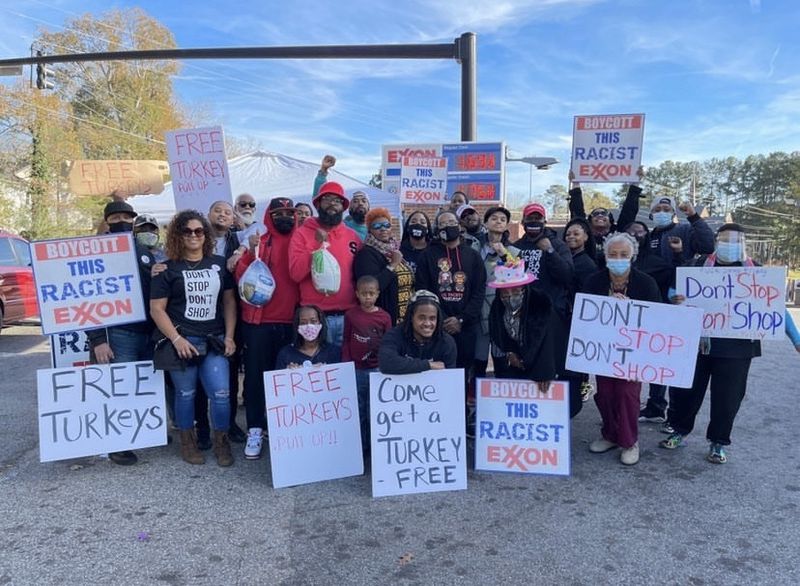 A group protesting the ownership of an Exxon station at 2345 Flat Shoals Road in DeKalb County poses for a photo while distributing free turkeys during the week of Thanksgiving 2020. SPECIAL PHOTO / B.J. ORR

As the days mounted, Sivji told local media that business was down 70% or more.

Page and his crew were still out there everyday, slowing the afternoon rush to a trickle. At the same time they turned the corner into a sort of community resource center, handing out food and diapers to needy neighbors. For Thanksgiving, they distributed 300 turkeys and 1,000 boxes of produce.

Page and a few others actually ate their holiday meal on the sidewalk outside the store.

On or about Dec. 15, a mediator working on Sivji’s behalf summoned Page for a closed-door meeting. Surrounded by stacks of sodas in the stockroom, they reached an agreement.

Sivji would put the store up for sale, and the protests would stop for 30 days after it was listed.

Page would be given the opportunity to match any offer made by a potential buyer; he’d established a GoFundMe and an LLC and hoped to use his connections in the music industry and elsewhere to find well-heeled investors.

On Dec. 21, after 66 consecutive days of acrimony, the corner went quiet.

The gas station was, eventually, listed for $3.5 million.

“Maybe God wanted me to get out of here,” Sivji says.

The agreed upon ceasefire expired in mid-February, but Page and company didn’t show up.

Page says he’s still weighing whether or not to resume the boycott.

Details are still murky about Sivji’s claims that he’s under contract for a sale. The mediator working for Sivji confirmed as much, though Page says he hasn’t been notified or given the chance to match the alleged bid. He’s not yet ready to concede the dream of buying it himself, with investors’ help — converting it into something with fresh food, sandwiches, smoothies, anything healthy.

After nearly five months tumult and turmoil, it remains unclear exactly what will happen next. But Page hopes that, one way or another, the fight is almost over.

“The goal for us,” he says, “was to get him out of our neighborhood.” 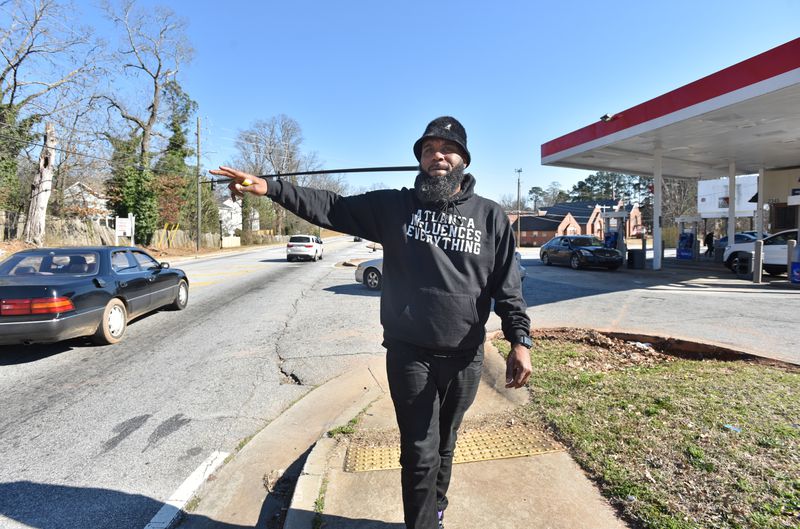 In Georgia, Republicans Take Aim at Role of Black Churches in Elections