No timetable for widespread virus testing amid ongoing test scarcity

Leah Roberts opens up a delivery of COVID-19 samples for testing from a local practice as fellow Molecular Biologist Aubrey Kellison looks on, at Ipsum Diagnostics labratory on Monday, March 23, 2020. Kellison is training in order to take procedures back to West Virginia to implement. (John Amis)

A shortage of kits and testing supplies nationally means rationing of coronavirus tests is likely to continue in Georgia, and state officials do not know when broader testing of the public will be possible, The Atlanta Journal-Constitution has learned.

Officials hope the two-dozen or so drive-through and other remote testing sites set up by public health agencies, labs and hospitals in Georgia will eventually help expand testing more broadly. Five thousand test kits provided by the federal government were recently deployed to two federal-state drive-through testing sites in Albany and Cherokee County, and the state received 1,550 kits this week from private suppliers, Cody Hall, a spokesman for Gov. Brian Kemp, said Wednesday in an email.

But until governments and the private sector can source more kits and supplies such as swabs, testing will remain rationed in Georgia and many other states for the very sick, vulnerable people such those who live in nursing homes and emergency workers.

Limited testing — both statewide and across the country — has hampered the U.S. response to COVID-19, denying the nation’s public health agencies and elected leaders invaluable data showing how prevalent the virus is and where it’s moving, health experts said. 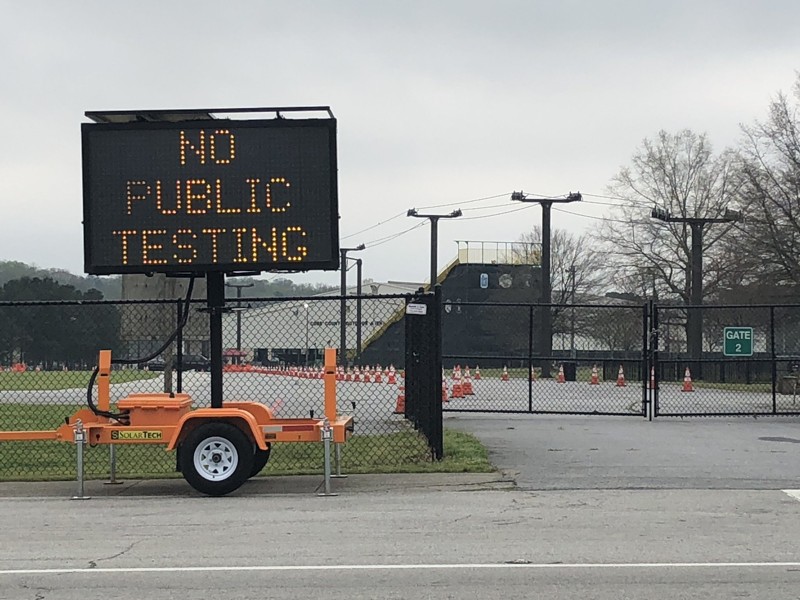 An electronic sign outside a COVID-19 testing center in Cobb County warns motorists “No Public Testing.” The Cobb & Douglas Health Department on Wednesday, March 18, 2020, opened the drive-through testing center at Jim Miller Park south of Marietta for high-risk people that is by referral-only. J. SCOTT TRUBEY/STRUBEY@AJC.COM Photo: The Atlanta Journal-Constitution

Georgia’s public health lab and private companies as of noon Wednesday had processed only 6,179 kits, according to state Department of Public Health (DPH) figures, compared to more than 10,000 in North Carolina, 11,000-plus in Tennessee and more than 103,000 in New York, according to data from the COVID Tracking Project.

The scarcity of testing kits comes amid fresh indications that Georgia’s test reporting is days if not a week or more behind an accurate count of infections. It’s unclear how many pending tests awaiting results sit at private labs, though a public health district covering parts of central Georgia said it was experiencing an eight- to nine-day delay in getting results from one private company, and a hospital group in Albany has reported similar waits.

The state also has not published a count of its test backlog, as other states have done. A state DPH spokeswoman said only that it takes 24 hours to 72 hours, including shipping, for its lab to process tests.

Accurate public information about testing has been further confused by the messages coming from the White House, which are often at odds with the situation on the ground.

President Donald Trump said March 6 that all who want a test could get one — something still untrue three weeks later.

On Monday, Trump said at-home tests — basically kits to collect nasal swabs to ship back to a lab — would be available this week. But the U.S. Food and Drug Administration as of Wednesday afternoon hadn’t approved any at-home tests, and issued a letter last week that caused at least two companies to back off plans to release such kits.

Government and commercial labs, meanwhile, remain swamped with backlogs of specimens to confirm COVID-19 diagnoses. Though capacity is slowly growing, health experts say the lack of testing and processing delays are a persistent chokepoint in the coronavirus surveillance system that is costing lives.

Heiman said it’s likely that Georgia has five to 10 times more COVID-19 cases than limited testing so far has confirmed. 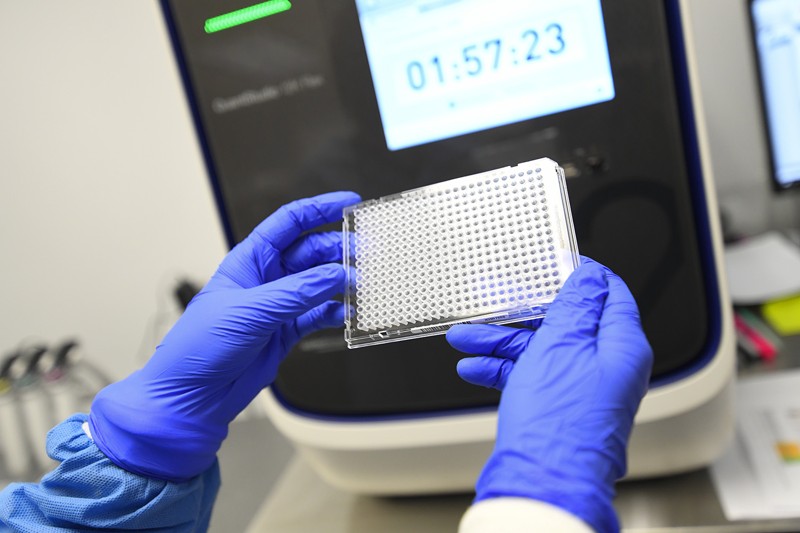 A lab worker holds a plate that will hold samples of possible COVID-19 and will be put in the machine behind it to be analyzed at Ipsum Diagnostics labratory on Monday, March 23, 2020. Photo: John Amis

Nancy Nydam, a spokeswoman for the state DPH, said in an email it is unclear “when there will be enough of a supply of tests to expand testing more broadly.”

The state and hospitals continue to prioritize tests for very ill patients, including older persons, people with serious underlying health issues, health workers and people who live or work in long-term care facilities where the disease can rapidly spread, Nydam said.

Last week, the state’s three largest hospital groups and Kemp urged people with mild to moderate symptoms not to seek a test and to ride out their illnesses in isolation at home. That was in part to preserve testing supplies and prevent the spread of COVID-19.

“At this point we don’t have the test kits available to do expanded testing, and how we are prioritizing the kits we have is supported by the CDC,” Nydam said, referring to the Atlanta-based Centers for Disease Control and Prevention.

When supplies warrant the ability to expand testing, the remote sites currently established she said “undoubtedly will help us when the time comes that we are able to test a broader segment of the state population.” 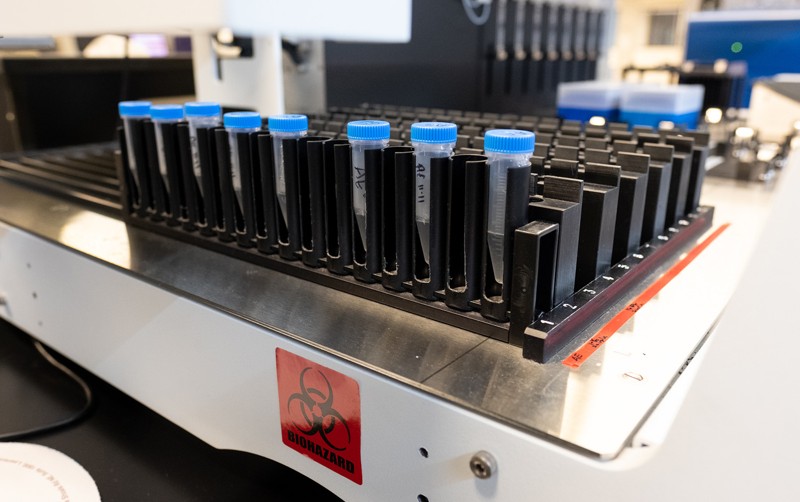 One of several machines in the Genomix Laboratories molecular diagnostic lab in Peachtree Corners that could be used to run as many as 5,000 coronavirus tests per day (Photo: Ben Gray for the Atlanta Journal-Constitution)

Georgia isn’t alone. States across the nation have reported critical shortages in test kits, swabs, chemical reagents and other vital components needed in testing and processing, according to an investigation by the New Yorker.

So many companies are now racing to produce test kits under relaxed federal regulations, experts quoted by the New Yorker said the system might soon have another problem — a glut of tests without enough stringent controls to ensure accuracy.

An AP investigation this week found that testing nationally has been constrained by a series of failures, including early missteps in the U.S. rejecting a test derived by the World Health Organization, flaws within a test developed by the CDC and not engaging the private sector earlier to expand testing capacity.

Given the known cases coupled with the slow roll out of testing, Georgia State’s Heiman said Kemp and other state leaders should go further to shut down the state and restrict personal interactions to curb the virus’ spread, Heiman said. 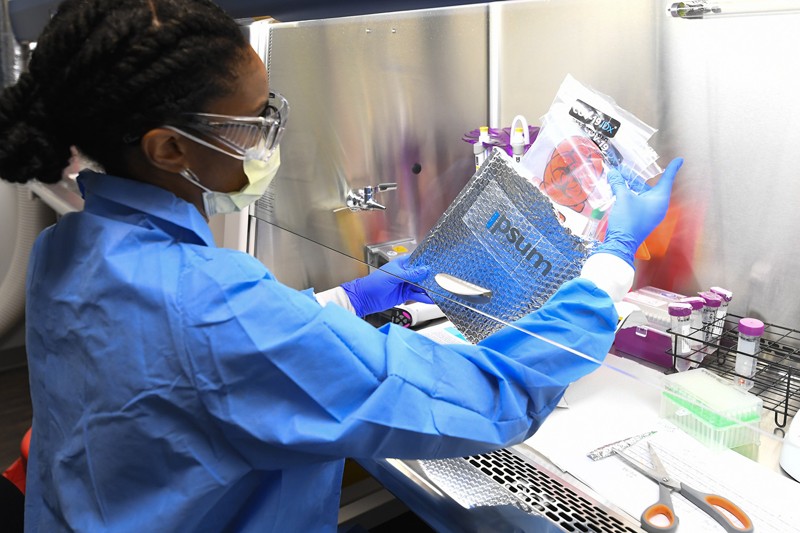 He called it “a tragic error that … will lead not only to an incredible increase in demand on our health system but also lives lost.”

“We know enough to know that if we wait for the numbers to get worse, we will be even further behind the curve,” Heiman said.

Broader testing earlier might have prevented forced social isolation efforts deployed in recent weeks that have closed schools, pummeled the economy, threatened the viability of businesses and putting millions of jobs at risk, he said.

Though Heiman said he favors broad testing of the public, given current resources, tests should be dedicated to the areas most in need.

Direct-to-consumer tests aren’t a good option, he said, as it would strain an already fragile testing system, and compete with hospitals for supplies and processing resources. A consumer test, he said, is also likely to have a high failure rate.