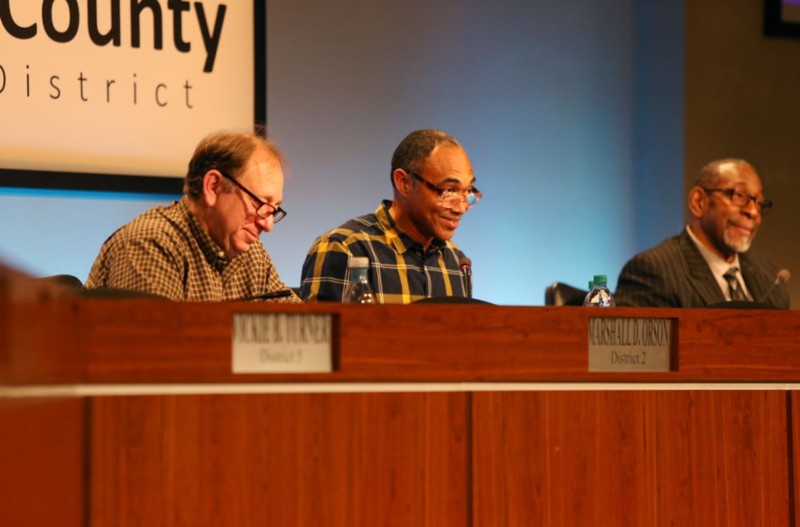 Several protesters lined the streets around the DeKalb County School District headquarters ahead of Monday’s DeKalb County Board of Education business meeting with signs requesting a forensic audit of district finances and for Green’s dismissal.

The Covenant Church, government watchdog Restore DeKalb and civil rights group Operation LEAD said they have taken issue with what they call instability within district leadership as well as a proposal that could see the district collect another quarter billion dollars in taxes to pay for construction materials cost increases and additional capital projects.

“The DeKalb County School District has failed its financial obligations to students and property taxpayers,” the groups said in a joint statement on Thursday. “For years, residents of DeKalb County have been subjected to millage rate increases and E-SPLOSTs (Education-Special Purpose Local Option Sales Tax) under the guise of helping the children, without long-term results.”

Joel Edwards, Restore DeKalb’s president, was removed from the school board meeting’s public comments portion as he began remarks, with school board chairman Michael Erwin commenting that Edwards was not on the approved list of speakers.

“Dr. Green, you didn’t have any idea what you stepped into, my brother,” began Decatur resident Willie Pringle during his public comments at the school board meeting early Monday evening. “But I wanna tell you it’s time to move on.”

Pringle’s remarks ended with many of the 200-plus attendees chanting, “Green’s got to go.”

Like Carstarphen, Green is expected to leave the district when his contract ends on June 30, 2020. The announcement was made in May, in a press release from the district where Green said he was leaving for personal reasons. The DeKalb County Board of Education did not renew Green’s contract in 2018 or 2019, after approving one-year extensions in 2016 and 2017.

In addition to Green’s impending departure, several of the district’s top spots are currently being occupied by temporary leaders. District officials have said national searches were ongoing for a new superintendent as well as chief information officer. The chief information officer position, as well as leaders for its human resources, operations, legal and associate superintendent are all currently filled by interim leaders after several high-profile departures in the last 13 months.